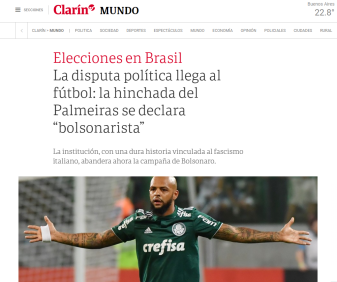 After two isolated events in the last month – Felipe Melo dedicating a goal to radical far-right presidential candidate Jair Bolsonaro and a group of palmeirense ultras chanting homophobic rants in a metro station – Argentine newspaper Clarín in an article states that Palmeiras, the institution, is endorsing Bolsonaro’s campaign, in coherence with its racist present and past, having been “a fascist germ inside Brazil” during WWII.

The statements are utterly revolting. Facts are well-known and readily available for anyone. Below, just the basics:

1) Palmeiras, the institution, has made no political statements whatsoever, neither for nor against any candidate. After the Felipe Melo incident, the club released a note, highlighting the obvious: Melo expressed a strictly personal opinion, completely disconnected from Palmeiras.

2) There are idiots everywhere, including in the ranks of Palmeiras supporters. The homophobic chants are disgusting and criminal, but unfortunately still very present in Brazilian football culture.

3) In Brazil, during WWII, every single association/enterprise/organisation with ties to the Axis powers suffered pressure by society and were discriminated against by Brazilian authorities. Numerous cultural and recreational centres (including football clubs) founded by people of Japanese, German and Italian decent were shut down or forcefully annexed to other institutions. The same would have happened to Palmeiras, had not palmeirenses with sticks and stones defended their Palestra Italia stadium from a physical, hostile takeover orchestrated by the local authorities. Palmeiras have no ties to fascism: Palmeiras were, like many others, a victim of authoritarianism in Brazilian society.

The Clarín article, signed Eleonora Gosman, is at best a piece of historical revisionism paired with sloppy journalism; at worst, an extremely dishonest attempt to whip up antipathy against Boca Juniors’ opponent in the upcoming semi-finals of the Libertadores Cup.

Anything Palmeiras repudiates the article and strongly encourages Palmeiras to take legal action.