Leandro – the 23-year-old striker has signed a five-year contract with Palmeiras, coming in at US$ 1.85 million for 50% of the player’s economic rights. At Chapecoense, Leandro scored ten goals in the second half of the 2014 Brasileirão. Approached firstly by Cruzeiro and Flamengo, Leandro was set for a transfer to rivals Corinthians before Palmeiras made the winning offer.

Andrei Girotto – the defensive midfielder is the second piece brought in from América/MG and is by many considered one of the most interesting revelations of this years’ second division national championships. Turning 24 in February, Girotto comes on a one-year loan with an option to buy. In addition to his defensive qualities, the 185 cm tall player is known for taking powerful shots from outside the penalty area when opportunities arise.

Gabriel – the 22-year-old defensive midfielder served Botafogo in 2014 before being released from his contract due to unpaid salaries. Palmeiras’ coach Oswaldo de Oliveira specifically asked for this player, having been responsible for bringing him up to the first team while coaching Botafogo in 2012-2013. Like Leandro, pulled from the claws of Corinthians, Gabriel undergoes medical exams today and should be officially announced next week. Daniel, another former Botafogo midfielder/forward, was also an option but did not pass medical exams at Palmeiras (knee injury, at least three months recovery), ending up at SPFC.

Zé Roberto – with clubs like Real Madrid, Bayer Leverkusen and Bayern Munich on his CV, the veteran midfielder has been back in Brazil since 2012, playing for Grêmio. Despite having reached the age of 40, Zé Roberto is fitter than most and is expected to bring a lot to Palmeiras, both on and off the pitch: his ability to act as a mentor for younger talents is well recognised. The player has signed a one-year contract.

As we can see, so far, the priority has been strengthening the midfield. Palmeiras have been surprisingly active on the market and most sports journalists agree that Palmeiras are doing well, having signed the right players at the right price tag. Palmeiras’ new stance is also propelled by the fact that the club is financially in good shape, after Paulo Nobre’s two years of austerity.

That being said, a few more players are needed, and of star quality: a playmaker (Conca or Cárdenas on the wish list), a striker (possibly Fred, if price goes down, or Ricardo Oliveira) and a left-back. A centre-back of rank (possibly Réver of Atlético Mineiro) is also on the shortlist. As we enter 2015, Mattos will officially start working for Palmeiras and more aggressively seek to secure the missing pieces of the puzzle. Many of the larger Brazilian clubs are experiencing cash shortage and top players might very well have to adjust their salary expectations in order to meet the new reality.

Out of the 20 (!) Palmeiras players serving other clubs in 2014, two seem more likely to be reintegrated into the squad: striker Maikon Leite (Atlas, Mexico) and defensive midfielder João Denoni (Oeste, Brazil). Personally, I’d like to see Chico (Joinville, Brazil) be given an opportunity as well.

GOING
In 2014, no less than 50 players entered the pitch wearing our uniform, and 39 of these still remain at Palmeiras. Coach Oliveira has indicated he is aiming for a squad of 34: four goalkeepers and three players for each remaining position, the third options for each position being a junior player. Needless to say, several players will walk the plank. A few have already settled their destinations: defensive midfielder Marcelo Oliveira is heading for Grêmio; keeper Deola plays for Fortaleza next year; Wesley should be pulling on the SPFC jersey; and Lúcio might be looking at ending his long, brilliant career in China.

2014 top scorer Henrique has not reached an agreement with Palmeiras and is now considering his options. Several other players will also see their contracts expire this year, without outlook for renovation: Victorino, Eguren, Washington, Wendel, Juninho, Bruno César, Bernardo and Diogo. Light-heartedly I see them depart, except for Victorino, who perhaps deserves a second opportunity.

REMAINING
To round things off, the Gabriel Fernando soap opera. The kid, who now prefers to be called Gabriel Jesus, signed a new contract shortly before Christmas, extending his stay at Palmeiras for another five years. This is obviously great news: Gabriel is considered Palmeiras’ greatest revelation in many years and was this year’s top scorer of the São Paulo U17 championship with an amazing 37 goals in 22 games.
. 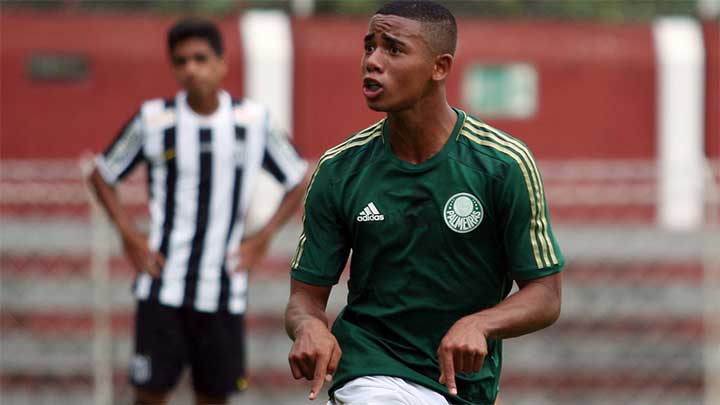 .
The bitter aftertaste originates from Palmeiras’ inability to close the deal early: again, blame Paulo Nobre, who let negotiations drag on for a full nine months. The original proposal from the player’s agents in March were for a salary starting at US$ 2.200 per month, increasing to US$ 3.000 the second year then US$ 4.400 the third. In the proposal, Palmeiras’ 75% share in the player would drop to 60%, while the agents would grow their percentage from 25% to 40%.

Nobre made a first counter-proposal only three months later. And while negotiations dragged on, Gabriel Jesus started to attract evermore attention. Naturally, the kid’s agents got bolder and bolder. The deal sealed earlier this month stipulates monthly salaries starting at roughly US$ 5.500, then, US$ 9.300, US$ 13.000, US$ 16.700 and US$ 22.200 for the four consecutive years. Much more unfortunate: Palmeiras’ share in the player has dropped from 75% to 30%, meaning the club will receive considerably less if/when the player transfers to another club.

Actually, Palmeiras came very close to losing Gabriel Jesus altogether, as his agents were more than fed up with the hassling (although they, of course, had their share in it). In the end, Gabriel Jesus’ personal wish to remain at Palmeiras was the determining factor.
.