Palmeiras’ penultimate game this season was also Zé Roberto’s last, the 43-year-old midfielder a few days earlier having announced his retirement from professional football. Naturally, the chosen stage was the Allianz Parque, with Botafogo co-starring and correctly suffering a 2-0 defeat, goals by Dudu and Keno (really worth checking out, highlights below). The result propelled Palmeiras into second place.
.

At Palmeiras, he played 133 games as midfielder, sometimes as left defender, and scored 10 goals. He was instrumental in the 2015 Brazil Cup title and the 2016 Brazilian Championship title, exercising supreme leadership on and, in particular, off the pitch. His personal determination to contribute to the elevation of Palmeiras’ grandeur and self-esteem to that of previous glorious decades was surprising, touching and very necessary: like few others, Zé Roberto in a short time fully understood and incorporated Palmeiras into his very self, and in the most professional of ways. Mind you, Zé Roberto is oldest player to pull on our jersey and the oldest to score for Palmeiras. The oldest to score in a Libertadores game and the second oldest to ever have participated in the tournament.

His farewell at the stadium was emotional and worthy. Today, he summed up his life until now with the words “I have fought the good fight, I have finished the course, I have remained faithful. And I have left a legacy.” Indeed you have, Zé Roberto. Indeed you have. Thank you!
. 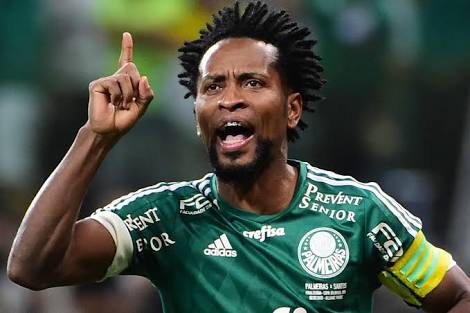 .
Upcoming Sunday, against Atlético Paranaense, Alberto Valentin commands the men one last time. Closely observed by Roger Machado, who no doubt is contemplating the squad’s strengths and weaknesses and how he in 2018 will make the best out of Lucas Lima’s arrival.

Scoppia che la vittoria è nostra!
.
— ooo —
.
UPDATE: Zé Roberto will be Technical Advisor at Palmeiras as of January 2018. In his new role he will work alongside director of football Alexandre Mattos and his aid Cícero Souza on a number of administrative functions. More importantly, Zé Roberto will also have direct contact with players and coaching staff, facilitating their interaction with the management and vice versa. Alexandre Mattos considers this an important function, much used in European clubs but practically unheard of in Brazil (at the announcement, he gave but one reference: Tinga at Cruzeiro).

This is excellent news. Much good could potentially generate from this arrangement. Congratulations to everyone involved!