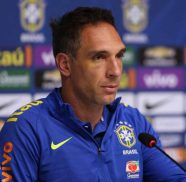 While with the Brazilian Olympic squad preparing for the Rio de Janeiro games, the Palmeiras keeper injured his right elbow and had to undergo surgery. Prass’ forced absence from most of the second half of the 2016 Brazilian Championship will now yield some € 150.000 to the club.

Since 2012, FIFA has adopted a program that protects clubs entrusting players to national squads for FIFA games and tournaments. In 2016, the Olympics were included in the mechanism, which triggered the request from Palmeiras’ legal department. This is the first time FIFA has granted such a request from a Brazilian club, the compensation based on the period of absence and salary of the player. Palmeiras have already received the first instalment, the second and final expected before the end of the month.

Now fully recovered, Prass yesterday were among the players reuniting for Palmeiras’ pre-season, aware he must step up his game to recover his position in the starting eleven.