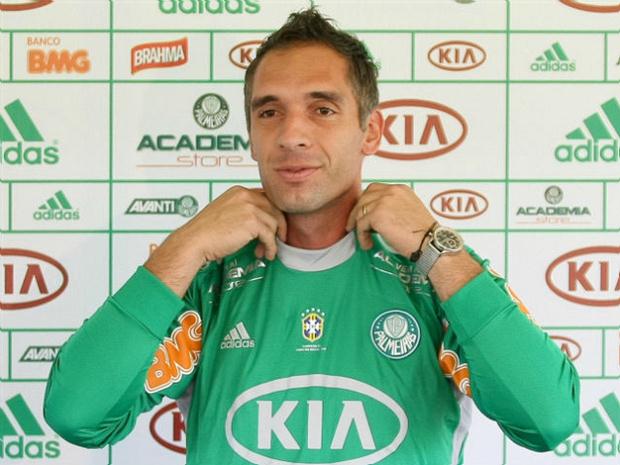 .
Perhaps not the most urgent position to fill at Palmeiras, but still a very welcome reinforcement considering the rather wobbly performances of Bruno and Alemão between the posts as of late: former Vasco da Gama keeper Fernando Prass has signed a three-year contract with Palmeiras. Prass is expected to be not only keeper of choice but a mentor of sorts for Bruno and especially young Alemão. It’s been an amazing 18 years since Palmeiras last signed with a keeper not originating from within the club.

Brought up at Grêmio, Prass has had a stable and trouble-free career that includes three years with Coritiba, three years with Portuguese club União de Leiria and, most recently, four years with Vasco da Gama. One of the most popular players at Vasco, the experienced 34-year-old got tired of waiting for his pay checks and in the end sought his release from the Rio de Janeiro club through the judiciary. His move to Palmeiras was certainly facilitated by the outlook to play in next year’s Libertadores Cup in addition to a reportedly hefty salary raise. Prass signed the contract last Tuesday – by coincidence on the same day as the sending off of São Marcos – and was formally presented and integrated into the squad two days later.

The Palmeiras stew anno 2013 is in the making, with Prass being the second new ingredient. There’s as usual a lot of rumours running, but here at Anything Palmeiras no ingredient will be sung before purchased and firmly tucked away in the basket; transfer speculations are a waste of time and in any case only serve the interest of the player and his agent, never the club.

That being said… Expect updates on new signings at any time. Stay tuned.