Nothing new in the Chinese eyeing the Brazilian market, but Palmeiras had to dig their heels deeper than ever to hold on to team captain Dudu as Shandong Luneng just would not quit. The initial offer worth € 12 million was followed up by a € 15 million offer, rejected by Palmeiras last Tuesday. Facing the possibility of a final offer approaching the 20-million mark, Palmeiras president Galiotte sat down with Dudu and explained the rationale. Dudu is a key player in Palmeiras’ title aspirations this year, even more so after Keno’s exit a few weeks ago. At Shandong, Dudu would cash in four times as much, but Galiotte told him that if that’s what he wants, that’s what he’ll get, but not until the 2018 season is finished. Soon we will learn Dudu’s reaction to all this, on and off the pitch.
. 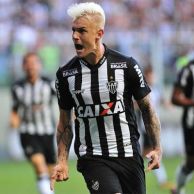 While working on the Dudu end of things, Palmeiras threw Shandong a bone, and a fat one, which they took: Roger Guedes, top scorer so far in this year’s Brazilian Championship and currently on loan to Atlético Mineiro, for a transfer fee of € 9,5 million, out of which Palmeiras receive € 4,3 million. Unless something goes terribly wrong in the few hours before the Chinese transfer window closes tomorrow Friday, Guedes will be taking Mandarin classes before you can say zǎoshang hǎo.

Thus it seems Palmeiras will be able to keep the squad fairly intact through the World Cup break, which at least in theory should enable Roger Machado to not only pick up where he left but improve the mesh further. Add to that Gustavo Scarpa’s reintegration and the still early but nevertheless promising signs of symbiosis between the former and Lucas Lima, and Palmeiras supporters have reason to be optimistic.  That being said, the strikers remain a concern. As soon as Colombia was out of the World Cup, Borja was on the operating table, undergoing an arthroscopy to treat a meniscus injury. Nothing too serious it seems and he’s expected back on the pitch in 5-6 weeks. But in what shape? Will William make it on his own while Borja recovers? I say “on his own”, as Deyverson has been far from impressive. There is also Artur, but he’s just recently promoted and has much to learn. Does Director of Football Alexandre Mattos have an ace up his sleeve? Seems unlikely. Although no one expected him to sign Dudu a few years back… Palmeiras could certainly do with the addition of a quality centre-forward right now.