With 19 rounds of the 2019 Brazilian Championship behind us, it’s time to look at the numbers halfway through the tournament.

Palmeiras performed exceptionally well in the first nine games with Felipão in charge, computing eight wins and one draw. The Copa América break brought big change, installing a dark cloud over the team: in the following seven Brasileirão games, Palmeiras did not win a single one. That, combined with the eliminations in the Brazil Cup and Libertadores Cup, brought about Felipão’s dismissal. Mano Menezes got off to a flying start, winning the three remaining games.

Palmeiras ended the first half of the Brazilian Championship with 39 points (11V, 6D, 2L) and a +16 goal difference (30 GF, 14 GA) – the club’s best performance under the current format of the tournament (round-robin with 20 teams). 2019’s numbers are superior to those in 2016 and 2018, when Palmeiras were crowned champions. 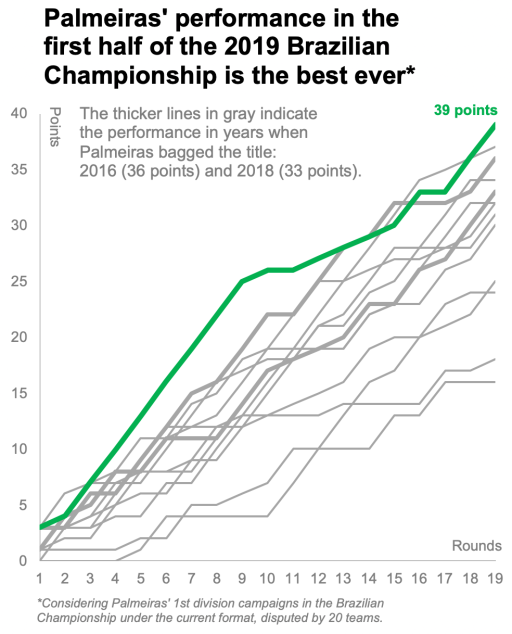 2019 matched 2009 in lowest number of defeats: only two. The attacking numbers were the third best ever and the defensive numbers the second. 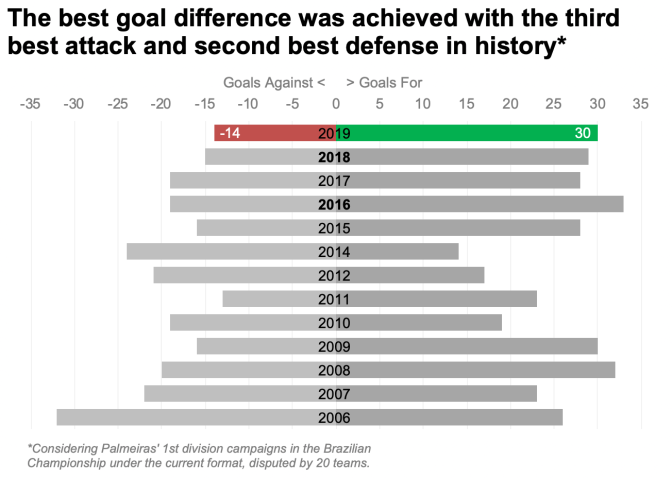 The good performance in attack and defense resulted in the best goal difference to date. 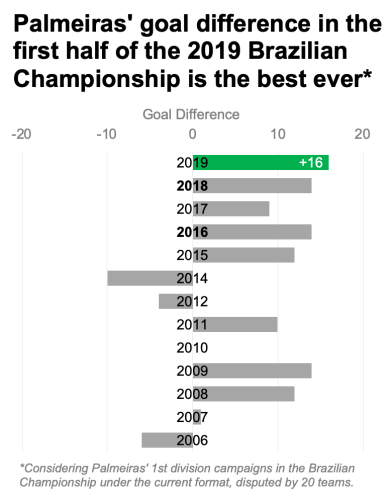 Besides the good overall performance, the first half of 2019 brought us the second best home campaign ever and the fourth without losing a single home game. The away campaign was also good, the third best ever.

Curiously, Palmeiras’ third best offensive campaign did not placed any players on prominent positions in the top scorers’ table: Dudu is best placed in sixth (shared), with five goals. There are another ten players ahead of Dudu, with Flamengo’s Gabriel heading the count at an impressive 16 goals in 19 rounds. Arrascatea, also Flamengo, is in third with eight goals. Thus, out of Flamengo’s 42 goals scored so far, 57% bear the signature of the duo. Strength or weakness? Depends on your outlook.

With such a great first half of the tournament, Palmeiras would normally head the tables, but as already mentioned, Flamengo’s scoring has been off the charts. The Rio de Janeiro team enjoy a three-point margin to second-placed Palmeiras, but with 19 rounds to go, absolutely anything can happen. The tournament is long and teams tend to oscillate; Palmeiras took quite a spin but now seem to be back on an ascending curve. Will Flamengo keep up their performance level for another three months? Also worth considering is that Flamengo might need to dose efforts due to the upcoming Libertadores Cup semi-finals, where they early and late October play Grêmio away and home, respectively.

Palmeiras, with a sole focus on the Brazilian Championship, have every possibility to lift the national championship trophy for the eleventh time by the end of the year. The target is locked!

– – – ooo – – –
text and graphics by Augusto Anteghini Oazi, with input from Kristian Bengtson