Luiz Felipe Scolari was on Friday afternoon formally welcomed at Palmeiras, receiving from club president Galiotte’s hands a jersey with the number 3 – surely a reference to Felipão’s third spell at the club. The press conference that followed was very Scolari – the old man has not changed and the determination was there, the temper, the fire in his eyes. Supporters and sports journalists alike know what to expect in that regard. But what about the football, the tactics, the philosophy of the game? What is to be expected from the experienced champion, having spent three very successful years in China?
. 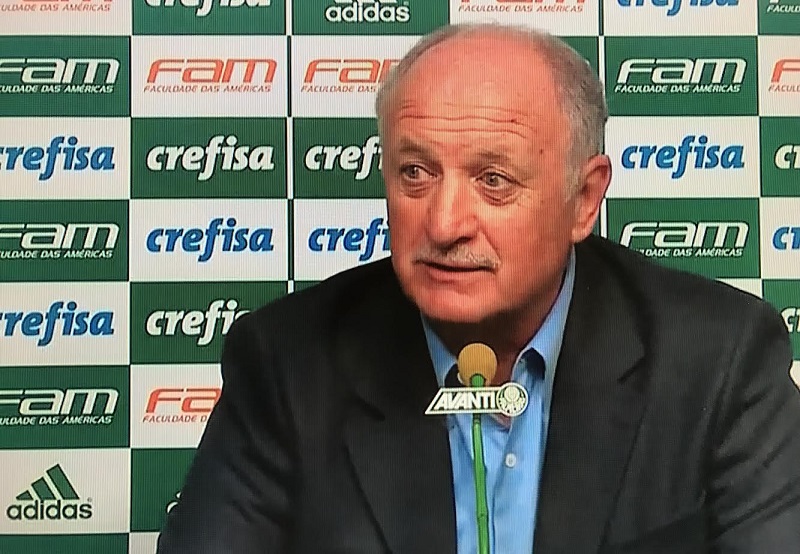 In his debut as contributor to Anything Palmeiras, Romualdo Pereira gives us his take on the return of one of Brazil’s most emblematic coaches. Enjoy the article and feel more than free to use the “comments” section below. Avanti!

It was never about eleven androids and one ball. Like poker, football is not about parts, but about people, and their mentalities.

Luiz Felipe Scolari arrives to manage egos, wants, desires and above all, the mental balance of a boiling Palmeiras. I do not initially mention football tactics because of the urgency of solving the mental issue, not because of the proclaimed clichés coming from parts of the press and supporters on social networks. Scolari is not outdated, his way of playing – pressing and direct game – is widely practiced all over the world, including in the major European leagues. What he does not do is alter his style of play to please a certain aesthetic very valued today, and this is a good thing: to excel, a coach needs to be, above all, confident in his convictions, because, as “el loco” Bielsa says: “What does a coach do? He convinces”.

It is clear that the Palmeiras of 2018 have always been a team mentally burdened: reflections of a 2017 surrounded by unfulfilled expectations and an effervescent political environment. In the supporters’ imagination, any high-income athlete should not have psychological issues, but of course, they exist. In any sport, at any level, the mentality is one of the most relevant dimensions to master in order to reach success. It is all is about balance: will, but without anxiety; strength, but without exaggeration; confidence, but without ever lowering the guard. Scolari can and should take care of all this, since at his disposal he has a squad of quality and a working environment with a structure of the highest level (“I’ve only seen anything like this or better at Chelsea”, he told reporters).

I will not be naive to the point of believing that the director’s motives behind interrupting Roger Machado’s work and bringing in Scolari are based on football management alone. There is a clear search for a “shield”, a strong name to take responsibility for results on the ground, allowing the president – and his political leadership – to worry exclusively about the elections later this year. Despite this, aiming at a matter adjacent to football, the club management may have struck gold unknowingly: Scolari fits like a glove in the context of a mentally fragile team. He is an excellent manager, enjoys the respect of the athletes, has a great charisma and the experience to transform a rocky team into a mental fortress.

Tactically we will see, most likely, a team with a lot of pressing and direct play. Briefly, the pressing – a well-known feature with the teams of legendary Dutch technician Rinus Michels – is about “attacking without possession of the ball”. Also Felipão’s teams act like this: suffocating the adversary, sometimes confining them to a certain part of the field, cutting off passing options.

Offensively, the teams of Felipão are usually less “elaborate”, preferring vertical, direct play. Bringing forth a current comparison, Scolari likes to attack as Jürgen Klopp: pure Heavy Metal. At Liverpool, Jürgen has in Roberto Firmino his “pause before the chaos”, as he likes to say. With Felipão, this man may be Lucas Lima, Gustavo Scarpa, or even Dudu. What is certain is that he has a great squad at hand, more than necessary to set up a balanced and competitive team.

In life there are no certainties and in football, much less. It is obvious that nothing of what has been said above may materialize and that the return of Scolari could prove a huge failure. Nonetheless, I think the logical thing to happen is for him to improve the mental aspects of the team, harmonize playing style and tactics to the characteristics of the squad and deliver results with the efficiency that has marked most of his work, including the most recent, in China. We should not expect a team playing “beautiful”, with eight hundred passes per game, 5 minutes of uninterrupted possession before scoring. One has to expect from Scolari what he can offer, even more so as he arrives mid-season, with no time for training. Felipão has experience, willpower and is deeply motivated: you can see it clearly in his eyes.

In addition to the success of Palmeiras, I want the success of this charismatic and courageous professional, who bounced back after one of the greatest tragedies of world cup football and at the age of 69 still exudes the will to win.

We will be happy again, Luiz Felipe, together!