.
Hundreds of tiny cuts. Day in, day out. Took me some years to notice, partly due to innocence, partly due to my inability to pick up the finer strokes and the “in-between-the-lines” in a still to me very foreign language.

From those early stages of ignorance, I progressed to denial, considering a wide, orchestrated campaign a preposterous idea, driven by the passion that blinds the best of supporters of any club at any given time.

Patterns became more visible over time, and so did my knowledge of the society in which I find myself inserted. These and other things converted to a different insight, laying the foundation for what I am about to address: the multifaceted and deliberate attacks on the Sociedade Esportiva Palmeiras.

These attacks are partly rooted in decade-long feuds of both political and social order; the Italian origin of the club; the “enemy-of-the-state” sentiment flourishing during WWII, culminating in the forced name change from Palestra Italia to Palmeiras; the biased Superior Tribunal of Sports, based in Rio de Janeiro, always catering for the interests of carioca teams; the rotten to the bone Brazilian Football Federation (CBF); the equally pathetic Paulista Football Federation… These and other factors directly and indirectly contribute to direct and indirect attacks on Palmeiras, exemplified on numerous occasions over the years, as exposed here at AP.

Yet, we are still to address Palmeiras’ main foe, the true hydra. The Globo television network and its affiliates.

The power of Rede Globo is unrivalled, and on many fronts. For decades, this giant of the Brazilian media has called the shots concerning the Brazilian championship and the National Squad, a puppet master of sorts behind the CBF. The Network assigns time slots for games without regard to stadium attendance, only concerned about securing maximum revenues from their primary cash cows, the telenovelas. Weekday games finish close to midnight, spectators sometime left without public transport to get home by.

The Network has its darlings, Flamengo and Corinthians. “The Clubs of the People”. Little efforts sparred to award advantages to these two in the pursuit of a “Barcelona vs. Real Madrid of the Americas” setting. Flamengo and Corinthians receive about the double in broadcasting rights compared to other major clubs, including Palmeiras, without any numbers to justify the distortion. They get more airtime, without television ratings to back up the decision. The two frequently enjoy positive plot twists: a Flamengo draw is an “increased undefeated streak” while a Palmeiras draw is a “narrow escape from embarrassing defeat”. Would you believe the Globo network even sponsors the fabrication of banners and flags for the organised supporter groups of Flamengo and Corinthians?
.

.
The inflated broadcasting revenues enjoyed by the aforementioned darlings roughly correspond to what Palmeiras receive through the club’s Master Sponsorship agreement with Crefisa/FAM. Indeed an important source of revenue, albeit only making up some 16% of Palmeiras’ total inflow. The club is however frequently criticized in the media for “having accepted being hostage to the capital” and dependent on the whims of a sponsor.

Last year, after lengthy negotiations, Palmeiras opted for selling their 2019-2024 cable TV transmission rights to newcomers Esporte Interativo, part of the Turner Broadcasting Company, the television arm of Time Warner. This has generated two immediate effects: for the Palmeiras games that Globo would retain the right to broadcast (open air and PPV), the Network has offered Palmeiras a deal 20% below that of previous year. Palmeiras have so far refused; if stalemate prevails, Globo will be without broadcasting rights to 1/10 of games in the 2019 Brazilian championship.

More seriously, and as former Globo employee Luiz Ademar confirmed a few weeks back, the Network has been instructing their sports journalists to trash-talk Palmeiras. And not only Palmeiras, but any team that signs with Esporte Interativo.

Palmeiras’ exposure has diminished on cable TV and even on the radio, with the CBN and Globo radio stations sometimes opting out from a transmission that seemed like a no-brainer.

Add to this the absurdities frequently seen on social media. I refuse to linger on this topic, but will provide you with one example: “How many goals will Teo Gutiérres score against Palmeiras?” is the question posed by Globo affiliate SporTV. One would think the Network would express support for a Brazilian representative in the Libertadores Cup. Think again.
. 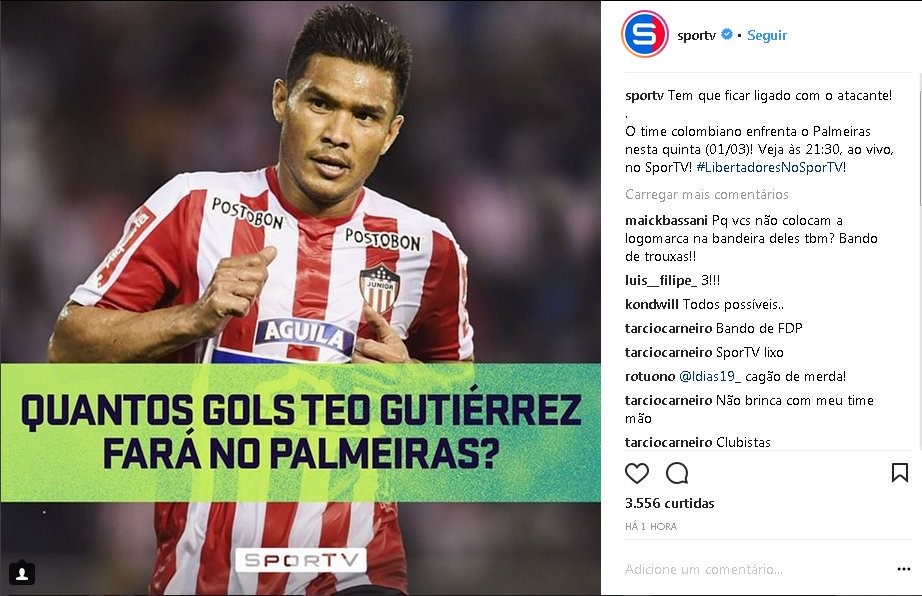 .
Isolated, the aforementioned examples are easily brushed aside. Compiled, they draw a different picture. A picture also subject to healthy scepticism, were it not for its perpetration over time. And its effect on the referees.

No, there is no orchestrated conspiracy among referees to benefit certain teams and make life harder for others. No need to: everyone knows what happens to the career of a referee who makes a crucial mistake or two against Flamengo or Corinthians. Referees in Brazil never talk, unless they have committed such a mistake. A few weeks back we had one actually crying to the press outside the locker rooms.

No wonder attendance is dropping all over the scale. Supporters in general are tired of the bias, the manipulation and the outright lies. Palmeiras supporters in particular, who last week launched a twitter campaign that within hours reached the worldwide trending topics with the hashtag “GloboRespeiteOPalmeiras”.

Unhappy costumers is normally not good for business. In this particular context, unhappy costumers might hurt the brands associating themselves with Rede Globo in general and with football in particular. Food for thought.