After the visit “down under”, Bruno Maciel of the Olé Palmeiras website returns to Europe, disembarking in Portugal to tell the story of Palmeiras Lisboa. Founded just over two years ago, this palestrina community is firmly installed in the land of the thick moustaches, currently going through both growth and restructure, entailing among other things a new board of directors, the creation of a new logo and picking a new HQ.

This is the third article in a series, featuring the main Palmeiras supporter groups outside of Brazil. Translation by yours truly.

Not long ago, Palmeiras Lisboa was comprised of only 10 members, who took turns gathering in their own houses/flats or any of two restaurants: the “Storik” and the “Chiado Terrasse”. Today, the group is some 60 heads strong and regularly meet at the “Zap Tuga Bar and Restaurant”. The establishment, located at Rua Dr. Antonio José de Almeida 10A, belongs to a family of palmeirenses, who opened their door and arms to the group.

The adoption of a single venue was necessary, mainly, in order to avoid further problems with the police, Palmeiras’ Consul in Lisbon Netto Baptistella explains. “In 2016, ahead of the game that would define the Brazilian Championship, we gathered at the home of one of us to make a barbecue and watch the match against Chapecoense. After the final whistle we started celebrating, which bothered the neighbours. Around 7pm, the police came knocking, but we argued that it wasn’t even 10pm and that we should be allowed to enjoy ourselves. On that occasion the police kind of agreed with us, left, and the party continued”.

Baptistella is one of the founders of the Palmeiras community in the Portuguese capital. In 2015, he created a facebook page with the objective of finding other palmeirenses to socialise with. Quickly, Daniel Queiroz Reis, responsible for a “Palmeirenses in Portugal” page, made contact. The two decided to merge their virtual spaces and gradually, more and more peoples joined in.

The Portuguese palmeirense
The near abortion of the 2016 Championship celebration was not an isolated episode. According to Baptistella, when it comes to football celebrations, the citizens of Lisbon are not particularly forgiving of Brazilian fans. Precisely for this reason, the Palmeiras community chose not to celebrate the title in the Marquês de Pombal Square, main point of celebrations in Lisbon. “The square is a traditional place, but the Portuguese think Brazilians in general drink too much and are too loud. So, in order to enjoy ourselves more, we avoid public places for these celebrations”, the consul adds.
. 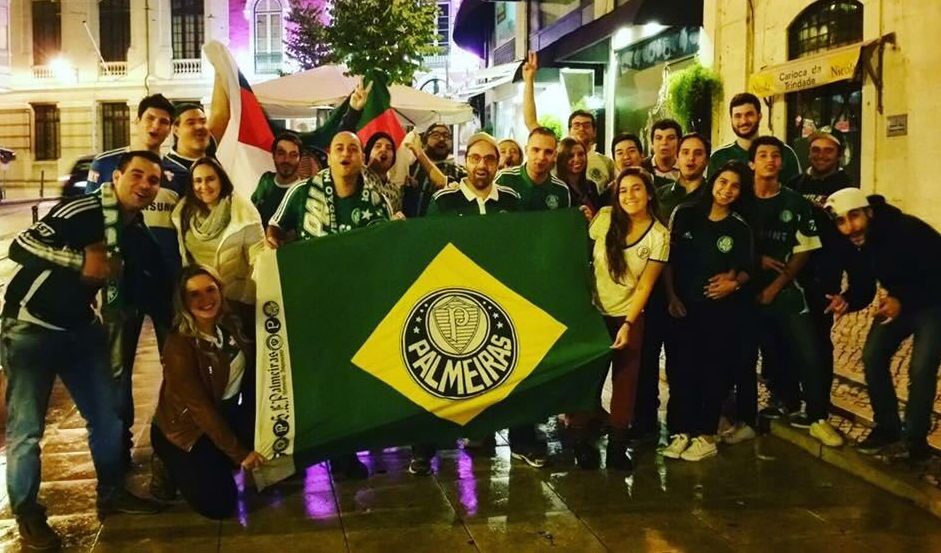 .
However, not every Portuguese feel the same about celebrating palmeirenses. The gatherings of Palmeiras supporters have turned fanatic 20-year-old Benfica supporter Luis Brito also into a true palmeirense. “He is a friend I made here in Portugal, and during the 2016 campaign, I gave him a Palmeiras jersey. He wore it to the game against Chape and celebrated with us, as happy as anyone can be. Luis is but one example, we have other Portuguese who have become supporters of the club through the influence of Palmeiras Lisboa”, reveals Baptistella.

New ideas aplenty
In order to achieve the desired growth in the Portuguese capital, Palmeiras Lisboa has formed a new board of directors, two of the mebers being Leonardo de Gouveia Ferreto – from January 2015 to September 2017 part of Palmeiras Dublin – and Pedro Oliveira, a member of the organized supporter group TUP Itapira, in the interior of São Paulo. “We brought some fresh ideas when composing the board of Palmeiras Lisboa, such as changing our visual identity. In addition, we have already found a venue to see all games, offering us a structure with 60-inch TV and projectors. Now, we are awaiting Palmeiras’ approval of our new logo in order to revamp our facebook page and attract ever larger numbers of supporters to the Zap Tuga on game days”, says Ferreto. “It is, in my opinion, very important to create strong bonds of friendship through the Sociedade Esportiva Palmeiras. Palmeiras Dublin has brought me great personal friends like Renato Sales, Patricia Medeiros and Diego Bianchi”, the new board member concludes.

Palmeiras Lisboa is open to all palmeirenses living or visiting Portugal: just pop by the Zap Tuga or contact the directors through the Palmeiras Lisboa facebook page. You will also find additional contact info at the Anythig Palmeiras “abroad” tab.