With roughly US$ 60 billion being pumped into sports through sponsorship deals every year, one would assume the average business model to be solid and well defined, securing that companies benefit from their investments. Well, think again. Research on the topic is surprisingly scarce and the main findings of the studies that do exist, surprising by their own merit.

Do sponsorship deals increase brand visibility and value? Sales? Company net worth? How could these and other indicators be better studied, fueling more qualified discussion on the topic?

Below, Douglas Monaco gives us his take on a highly relevant article, “Does football sponsorship improve company performance?”, inserting it into the context of the current (for Brazilian standards) controversial Palmeiras x Crefisa/FAM partnership. Enjoy!

Improving the discussions on sponsorship of football clubs

In the last weeks, the relationship between Palmeiras and Crefisa/FAM has generated a new wave of media attention.

On the one hand, people have called for financial fair play, claiming that Palmeiras’ spending on players has to be curbed to avoid an otherwise uneven, unbalanced situation in which the tournaments will be tilted towards the club, artificially increasing the club’s odds of winning.

On the other hand, there is extensive coverage of the alleged rewriting of some parts of the partnership contract. According to repercussions in general, the changes would have been triggered by the Brazilian IRS (Internal Revenue Service) investigation of how Crefisa/FAM was accounting for the amounts paid in signing of players.
. 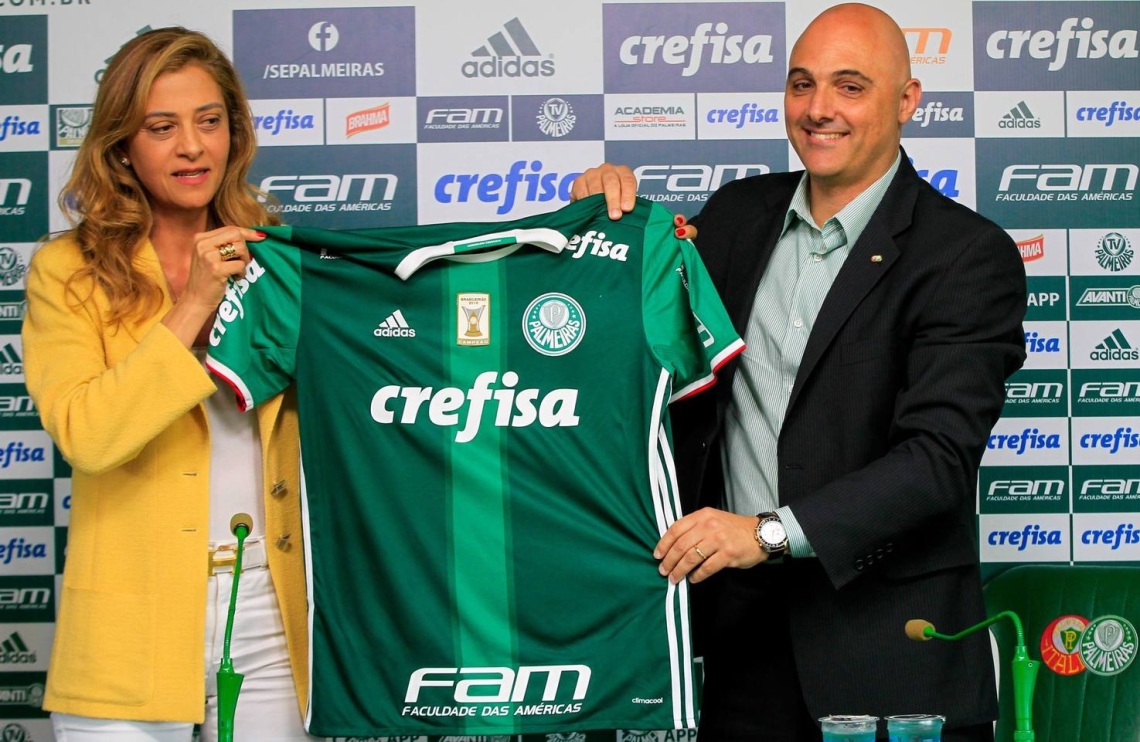 .
The fact is that since its beginning in January 2015, the partnership has been a customary subject in the TV sports news and internet sports outlets. The comments are purportedly making a technical assessment of football clubs’ sponsorship as a theme.

The truth though is that these discussions have generated much fuss, but nothing practical. In the words of the late and illustrious Palmeiras’ supporter Joelmir Betting, “much heat and no light”, an expression that used to pop up in his always clarifying chronicles.

Propelled by the last wave of comments, this post will bring to the discussion something unusual so far: results from a peer reviewed paper published in a scientific journal specialized in sports management. The paper was published in December 2016 and its results – rather counter-intuitive – are based on a 6-year analysis of 78 companies sponsoring clubs in 7 (seven) of the major European leagues.

The objective of the study has been to measure the effectiveness of sponsorship to the sponsor, i.e. does sponsoring a football club make the sponsor more successful in relation to key indicators like sales and market capitalization?

The goal of the post though is not so much to emphasize the results, but to suggest an approach to discussing sponsorship in football: analytical rigour, conceptual formalism and relentless objectivity. By improving the analyses, conclusions about the subject will at once be more reliable and more useful.

2.1 Context of the study

There are many reasons to study the effectiveness of sports sponsorship to the sponsoring company.

First of all, according to the Handbook on the Economics of Professional Football, sports sponsorship as a business is estimated to have drawn in 62 billion dollars in investments during 2017, with football assumed to have received sizable parts of it.

Beyond this quantitative aspect though, the notoriety of the phenomenon in the whole world seems to be only increasing. Brands – well-known as well as up and coming – are seen in shirts of leagues in a variety of sports, with football as a front runner in the context.

Given this combination of economic size and prominence, the question is unavoidable: does such a cost draining, prominent activity actually generate value for those investing in it? Do sponsors increase sales, become more profitable, do they increase their wealth due to their investments in sponsorship?

One basic difficulty in studying the phenomenon is to reach a consensus in defining sponsorship: is sponsorship “paying to be seen”? should it allow the investor a say in sponsored entity’s affairs?

Studies about the sponsorship seem to follow a line of applying surveys to capture public opinion’s perception of sponsor, detect consumption intentions, mapping the repercussions of brand visibility both in conventional as well as in social media.

The study reviewed in this post adopts the usual “pay for visibility” concept. But it takes a different method: instead of the surveys, it attempts to quantitatively measure the impact of amounts paid by sponsors on their result-variables, things observable in the sponsors’ balance sheets.

2.2 Results of the study

The main conclusion of the study is: for the six years analyzed, there is no evidence that investing in the sponsorship of football clubs brings measurable benefits to the sponsor’s balance sheet.

And this finding is verified for practically all countries analyzed by the study. The sampled 78 companies are present in clubs of England, Spain, France, Italy, Scotland, Netherlands and Turkey, seven of the main European leagues.

The study uses regression analysis to measure causality between invested value and performance of the company. For all tests made, the result is that there is simply no causation, i.e. companies that invest in sponsorship don’t achieve better economic outcomes than those that don’t invest in sponsorship.

The variables of the model are quite straightforward: total amount invested in each year versus result-variables in the following year. The result-variables are of two kinds: sales income and market capitalization.

The choice for sales-income aims at reflecting the effect of sponsorship over the sponsor business primarily in the next year. The choice for market capitalization – share price multiplied by the number of shares in circulation – captures the expectation that the capital market has about the general profitability of the company also for the future years, so measuring the impact of the whole enterprise strategy, inclusive the investment in sponsorship.

The regression analysis used – considered a powerful tool to test this type of quantitative relationship between variables – makes important methodological adaptations aiming at vulnerabilities intrinsic of the situation, e.g. the “chicken and egg problem”: are companies that sell much more prone to sponsoring? Or companies that sponsor end up selling more?

In spite of allowing for this limitation, in its almost totality, the results indicate that there is no impact of sponsorship over sales.

The only admissible exception is the league as a differentiator: the French league presented a slight impact on sales. If this aspect shows to be replicable, a stream of research may be indicated.

Another aspect analyzed by the report was how “acting for the first time as a sponsor” could make the company more likely to benefit from the investments. Unfortunately, here too, results don’t show any significant impact on sales.

For this variable, the results are uniform in all circumstances: investing in sponsorship has decreased the market capitalization of the studied sponsors.

Market capitalization is a long-term indicator that reflects the average expectations of the capital market investors. Capitalization takes into consideration the expected net cash flows, discounted by the adequate rate, when income and payments are estimated, inclusive of the payments to sponsorship.

Losses in market capitalization translate into actual reduction in a company’s net worth, i.e. the loss in market value has to generate an entry – debit and credit – in the books that will be reflected in the company’s balance sheet.

The study does not give details of which countries show more pronounced losses, neither which sectors of the economy the sponsors belong to. Still, the correlation is deprecating enough to prompt a reevaluation of the strategy.

The study also controls for the global economic crisis of 2008 – to avoid the crisis being disguised into the lack of impact by sponsorship.

Another important point was to test which characteristics make a company more likely to sponsor: size and type of ownership are the factors more associated in the study.

Bigger companies and companies individually controlled seem to be more prone to engage in a sponsorship contract. Companies from the financial sector, those of more pulverized ownership and government companies are less likely to.

The study cogitates that the utility function of the sponsor owner seems to benefit more from sponsoring than any commercial benefit the company may derive from the contract.

The most unexpected statement made by the study is that “football sponsoring is more charity than business”.

2.3 Comments about the results

For many reasons, the results of this study have to be considered as surprising, to say the least.

First of all, the global investment in sponsorship is huge. So, there seems to be a strong contradiction as how can so much investment be made into something that doesn’t produce return?

The geographical and contextual reach of the study accentuates the surprise nature of the results.

In “contradiction to the contradiction”, the Brazilian case seems, to some extent, to confirm the study as in late years, Brazilian clubs have faced more difficulty in recruiting new sponsors than in the past. The cases of “clean jerseys” and one-off sponsorships have been more common.

The exception in Brazil really appears to be Crefisa/FAM whose amounts invested have only grown since January 2015. Beyond the increase in value, the scope of the investments has also varied – not only the brand is shown in the commercial properties of the club, but football costs have been directly covered by the company, e.g. signings and paychecks of certain players.

Not only have the investments grown: the general impression is that the visibility of Crefisa/FAM has been catapulted to record heights – much like Parmalat’s in the 90s. In addition, the sponsor’s performance data seem to indicate strong practical impact of the partnership. According to internet information published[1] at the beginning of 2017, the Crefisa/FAM group enjoyed a 30% increase in the enrollment of new students, coupled with the acquisition of 400,000 square meters of land in the eastern zone of the city of São Paulo, where a new campus will be built.

All this strengthen the impression that the partnership between Palmeiras and Crefisa/FAM could be an outstanding exception to the 78 companies study; with the obvious caveat that further verification regarding sales and net worth of the sponsor is necessary in order to affirm the exception.

Though not conclusive, the results reviewed in this article offer important insights into understanding sponsorship as a phenomenon.

For the time being, despite the huge investments made in sport sponsorship worldwide, one quantitative study covering a highly significant sample of European leagues indicates that sponsoring a football club does not constitute good business strategy.

At least not in a conventional way, i.e. paying a fee, inserting your brand and expecting your profits or at least your sales to grow as a result.

Counter-examples to the reviewed study would have to be researched.

But cases like the Palmeiras x Parmalat in the 1990s and Palmeiras x Crefisa/FAM now suggest that to derive tangible benefits, the level of investment must be above average and that apart from exhibiting the brand in the club’s commercial properties, the sponsor must somehow share in the business of club’s football department, vis a vis the co-management experiment with Parmalat and the signing of players by Crefisa/FAM currently taking place at Palmeiras.

Another aspect that the 78 companies study highlights is the “satisfying the utility function of the sponsor’s owner” as the primary goal of conventional sponsorship.

Interestingly, the occasional strengthening of this hypothesis – by further studies – could prove right the “benefactor” accusation that has victimized Palmeiras in the Crefisa/FAM partnership. Maybe, the so much criticized arrangement is actually a model to be followed instead of the “wrong example” to be avoided.

Anyway, what the remarks above suggest is that we’re still at an incipient stage in the scientific knowledge about sponsorship in sports/football.

Further studies will prove these and or other remarks right or wrong. Whatever the final results, what matters is that they be reached with appropriate methodology in a way that lends legitimacy and credibility to the output.