Yesterday’s Palmeiras vs Cruzeiro was a well-played and intense affair, nevertheless resulting in a goalless draw. I could and should elaborate a bit more on the game, the decision to play in Araraquara (the Allianz Parque not available for having received an Andrea Bocelli show the previous night) and the unusual lengths Palmeiras – or rather Paulo Nobre – is ready to go to have national squad members Gabriel Jesus and Mina present and in playing conditions. Could, should, but will not.

The single most important aspect of yesterday’s round happened during Fluminense vs Flamengo, where the runners-up were ahead on two occasions, before Fluminense scored the equaliser, an offside header, five minutes from stoppage time. The linesman raised his flag, but referee Sandro Meira Ricci overruled him, allowing the goal. A few minutes of discussion, as would be expected, then the entire Flamengo bench poured onto the pitch, affirming goalscorer Henrique had indeed been offside. After some ten minutes of this, the referee reversed his decision, disallowing the goal.
. 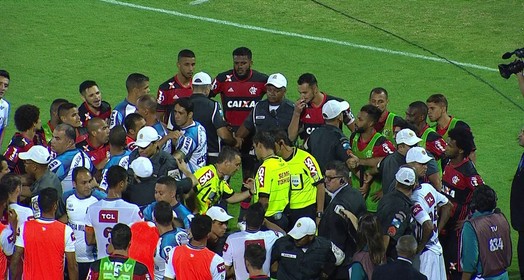 .
More than one Flamengo player confirmed they learnt Henrique was offside from external sources, i.e. someone watching TV or listening to the radio passing the information on to the bench. Players brought this to the referee, who succumbed to the pressure. Nothing of this appears in the referee’s post-game report, released only this morning: “game stopped for 10 minutes as players from both teams protested against a referee decision relating to an offside situation” and then, a little further down, “nothing out of the ordinary to report”.

Referees acting upon external sources of information are in clear violation of FIFA regulations and of a magnitude that sets the stage for a rematch. Fluminense president Peter Siemsen says he will demand it, but he does not stand a chance. Just as Palmeiras in 2012, when Barcos’ “Hand of God” brace against Internacional was disallowed due to external interference, contributing to the Verdão’s relegation that year.

“Why do you defend an unjust goal? Henrique was clearly offside, and justice was made in the end”, some shallow minds argue, failing to see that “making justice” in that particular moment automatically implied in violating justice on every single previous occasion involving controversial refereeing in the championship.

The correct thing would be a rematch. As many clubs as possible should joint ranks with Fluminense (oh, the irony) to endorse that rules and regulations be followed. “Good luck”.

If yesterday’s results stand, Palmeiras are found at 61 points, Flamengo at 60 and Atlético Mineiro, who beat América Mineiro 3-0, at 56. With eight rounds to go. Buckle up, people.