Marcelo Oliveira promoted change, opting for speed and agility against Cruzeiro’s slower defence. Gabriel Jesus and Barrios were found in the starting eleven, as was João Pedro, replacing Lucas on the right flank. Zé Roberto and Robinho in the middle, with Amaral positioned in front of centre-backs Vitor Hugo and Jackson. Egídio back on the left flank, Prass and Dudu completing the setup.

Within eight minutes, Barrios’ first goal in the Palmeiras jersey was a fact, beautifully assisted by Jesus. After that, it was all about the 18-year-old: he volleyed in 2-0 after a cross from Egídio, and then humiliated Cruzeiro keeper Fábio in a man-to-man duel, taking full advantage of the perfect pass received from Dudu to make it 3-0 with another ten minutes on the clock before halftime. Pure bliss.
. 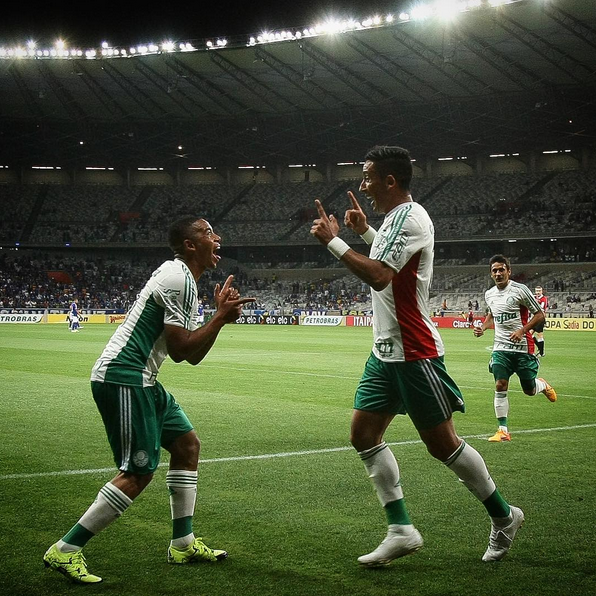 .
With Cruzeiro suddenly needing five goals, the game died right there. Palmeiras administered the result in the second half, a bit sloppily allowing Cruzeiro – with only ten men on the pitch – to score not once but twice. Coach Oliveira was delirious with the first half and unhappy with the second; understandable, but also understandable that players hit the breaks to save up energy ahead of Sunday’s important game against Joinville.
.


.
The result propels Palmeiras into the quarterfinals of the Brazil Cup. Five other teams secured their spots yesterday: Fluminense, Santos, SPFC, Figueirense and Vasco. The last two spots are defined tonight, with Internacional (vs. Ituano) and Grêmio (vs. Coritiba) in the driver’s seat. Another positive aspect: Mouche came on in the second half, having been eight months absent from the pitch due to a serious knee injury. No mistaking his enthusiasm upon returning, but he will have to work hard for a place in the starting eleven: direct contenders are Dudu, Gabriel Jesus, Rafael Marques, Kelvin and Cristaldo.

Ticket sales are good ahead of Sunday’s game, with a packed Allianz Parque to be expected.