Comes as no surprise to most of us that the highly regarded Brazilian Tribunal for Sports maintained its previous ruling, sentencing Palmeiras forward Dudu to a 180 days suspension for having pushed referee Guilherme Cereta after receiving the red card in the final of this year’s São Paulo championship against Santos.

Dudu’s behaviour was unacceptable, and I don’t consider the ruling absurd in itself. The absurdity lies is ignoring previous and recent trials where players have behaved in a similar fashion but received light sentences – the most obvious example being the three-game ban Petrus (Corinthians) received in September of 2014.
. 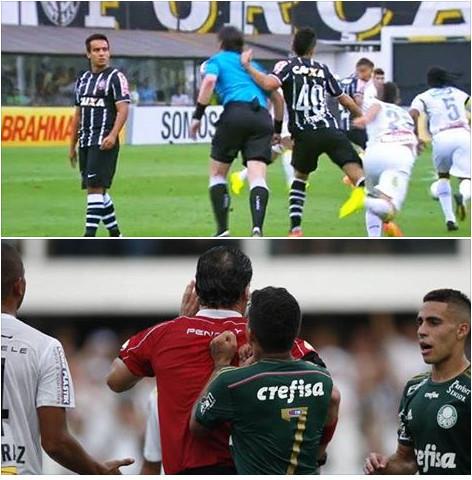 .
It’s not about defending the wrong, but defending equal treatment and predictability. Remember Barcos’ hand goal (more info here and here), disallowed after the judge indirectly used electronic aid to determine the outcome? How come Palmeiras always seem to be on the receiving end – be it when there are sudden calls to follow the law to the letter, or, as in the Barcos case, completely disregard the law?

Palmeiras have appealed and the Dudu case will now be brought before the Brazilian Superior Tribunal of Sports, the infamous STJD. Date yet to be set. Expect the worse.