Dorival Júnior promoted five changes to the starting eleven we saw last week against Fluminense: Deola substituted Fábio between the posts; Lúcio returned from injury to compose the centre-lock with Nathan; 17-year-old João Pedro made his debut on the right flank; Cristaldo and Mouche up front with Henrique.

Pressure was on already before kick-off, as a couple of bad results were pushing Palmeiras down the tables: Fluminense lost to Vitória (goals by former Palmeiras players Dinei and Vinícius) while Criciúma were beating Figueirense.

31-year-old Deola had not played a game since March, but he was not to blame for the disastrous first half. Palmeiras had no creativeness on the midfield and the use of the flanks was easily neutralised by Flamengo, easily approaching the Palmeiras box. With six minutes, Juninho, on the midfield instead for on his usual right flank, was booked. At ten minutes, he almost saw his second yellow. At twelve minutes, he screwed up while trying to clear the ball, and Flamengo open up the scorecard.

Diogo failed in everything he tried. Flamengo withdrew slightly, clearly awaiting those mortal opportunities to counter-attack. At 32 minutes, Lúcio didn’t move in harmony with the offside trap, leaving two Flamengo players clean with Deola, who rushed out to clear the ball, which bounced up on the Flamengo attacker hand before he passed it on to Alecsandro – in offside position – to increase the lead. Nightmare.

At 42 minutes, Palmeiras were denied a clear penalty as Henrique was dislocated in plain flight, in excellent scoring position.

In half-time, Dorival swapped Henrique and Mouche for Allione and Valdivia, the only question being why he waited so long.

Kick-off and full speed ahead. With 2 minutes on the clock, Diogo scored his first goal in twelve months. We saw a completely different game, it was night and day in relation to the first half. Valdivia was instrumental, as he normally is when on the pitch.

Palmeiras dominated the following 15 minutes completely, then Flamengo started to adapt to the new scenario. But it was Valdivia, exchanging quick passes with Diogo and Victor Luis, who allowed the latter to whip in the equaliser with 23 minutes on the clock. The 21.500 at the Pacaembu exploded: our supporters never stopped chanting – not even during the most dreadful moments of the first half of the game – and now they were rewarded for their loyalty.
. 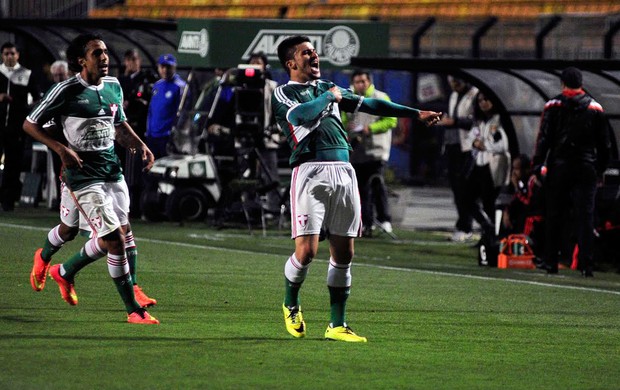 .
Palmeiras looked as if winning the game was possible, pressuring Flamengo hard, but that changed in the 37th minutes when man-of-the-match Valdivia did what he does best: leaves everyone flabbergasted with his immaturity. This time he STEPPED on a lying opponent, deservedly being sent straight to the showers. Unbelievable. The man is a mental case. When he doesn’t get injured, he does something incredibly stupid. Valdivia is an idiot. A complete idiot. This must be dealt with. Internally.

Today was the first of six crucial games against direct contenders for relegation: Flamengo (home), Goiás (away), Vitória (home), Figueirense (away), Chapecoense (home) and Botafogo (away). We’re not off to a good start, although today’s draw admittedly carries a certain air of victory due to the circumstances. Watching the team react was actually a relief. Deola played well. So did João Pedro – just a kid – in his debut.