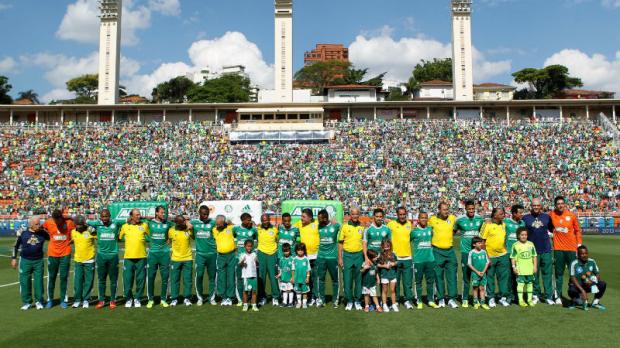 .
The stage was set, the crowds ready to party. Maybe not party, but at least acknowledge the team has been doing well enough to secure ascension with six rounds to go. And ascension was secured, but with the least favourable result: a goalless draw against Série B bottom dwellers São Caetano. In terms of beauty, only the homage paid to Palmeiras’ heroes from times passed before kickoff. With the ball rolling, enthusiasm little by little gave way for that lukewarm, shrug-of-the-shoulder feeling of mission accomplished and nothing more.

I’m not wasting more time in this game or the rest of the season, for that matter. Within three rounds, Palmeiras could and certainly should secure the title. That’s the only “goal” remaining before letting at least the most important players take their deserved holidays while the benchwarmers finish things off. The curious can do the math while checking out the tables here to the right. My hunch: Chapecoense, Avai and Joinville finish in the top four. Farewell, second division. For the last time.

Palmeiras are actually in a rather comfortable seat in regard to the build-up for 2014: key players will rest and fresh money will enter the club, allowing for carefully selected additions to the squad, and possibly/likely a new coach. President Paulo Nobre has refused to give details to the press, but talks with coach Kleina are certainly being conducted this week and the following, decision will be made and plans for next year will be drawn up and executed.

And here lies the focus in coming weeks and months, also for Anything Palmeiras: provide you with updated information on the backstage action that will prepare the Verdão for the centenary. Stay tuned.