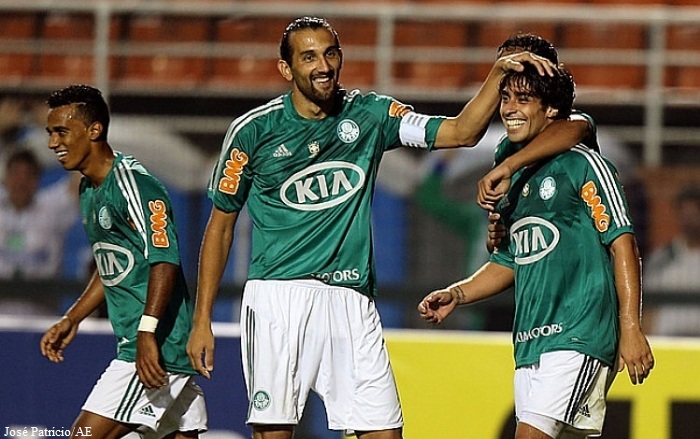 .
Losing to Penapolense 2-3 last Sunday – the guests one man short for most part of the second half – really rubbed palmeirenses the wrong way; there were many a protest against the perceived lack of attention and determination shown by several in the squad.

Luckily, the trend was (at least partially) reversed yesterday against São Bernardo: Kleina tested a bold 4-3-3 configuration, obviously allowing for dangerous counter-attacks but also giving starting playmaker Valdivia plenty of offensive options. The score was constructed naturally – two goals from Barcos and one from Valdivia – and could have been amplified had not the São Bernardo keeper been so much on his toes. If Valdivia only could remain without injuries and frequently ignite like he did yesterday, there is room for optimism: on a good day, the Chilean is clearly one of the best players in activity in Brazilian football. Highlights below.
.


.
Palmeiras have no money in the bank. Replacing the 20 players kicked out at the end of last season is an ungrateful task. The medium term solution lies in sponsorships and other partnerships with investors; the short term solution consists of loans and swaps.

Striker Mazinho has left for Vissel Kobe of Japan. No details have been made available, except that the contact signed is valid for a year and that Palmeiras received a satisfactory financial compensation in the transaction. It’s unclear if the contract includes a permanent buying clause.

Luan is another striker on the move. In spite of his 115 games for Palmeiras and being a hard-working and dedicated athlete, his limited skill has frustrated supporters and, in return, frustrated Luan back, being the primary reason for the (at least for now) temporary break. Everything seemed set for a change to Internacional of Porto Alegre, but Inter’s defensive midfielder Josimar, involved in a swap, didn’t fancy going to Palmeiras. Inter made a new proposal, this time in cash, which didn’t please the Verdão: Palmeiras need players. Football CEO Brunoro is in talks with Cruzeiro of Belo Horizonte and a deal seems likely to close already today Friday, reportedly involving defensive midfielder Charles, left-back Marcelo Oliveira and possibly a third Cruzeiro player in the swap.

Word on the street is also that Palmeiras are very close to signing 21-year-old offensive midfielder Ronny from Figueirense. The contract would be a one-year loan.

The Brazilian Football Federation has released the schedule for this year’s edition of the Brazil Cup. The modified tournament, running 3 April to 27 November, now features 86 teams in seven knockout phases. For the first time since 2000, also national teams qualified for the Libertadores Cup (Palmeiras, Grêmio, Fluminense, Corinthians and Atlético Mineiro) will participate in the Copa do Brasil, but these will only enter the tournament as the last 16 battle it out.

As Nobre and Brunoro continue the re-structuring of Palmeiras’ administration, one change stirred the blood of many a palmeirense earlier this week: the hiring of journalist Fernando Mello as head of the Club’s Communications Department. The department has been without command for some time, but still performed exceptionally well due to the more than competent work of messieurs Fabio Finelli, Marcelo Cazavia and Fernando Galluppo – the only three survivors when the Tirone administration terminated the contract with the firm they were working for.

So, what’s the fuzz all about? Well, there’s a fear that the award winning trio (Best Football Club Press Office 2012) will be substituted by people of Mello’s choice. And to further aggravate the anxiety is the fact that Mello is a feverish, outspoken and well-connected Corinthians supporter: for some people enough reason to disqualifying him from working at Palmeiras regardless of qualifications.

Supporters are passionate, often irrational. Now, from the directors, I expect rationality. I will give Nobre and Brunoro a vote of confidence on this one: unless they thought it very important I’m sure they wouldn’t have chosen Mello. And Mello, well, the man certainly has some balls walking straight into the Lion’s den, knowing he will be monitored like never before in his professional life. Welcome and good luck to you, Mello.