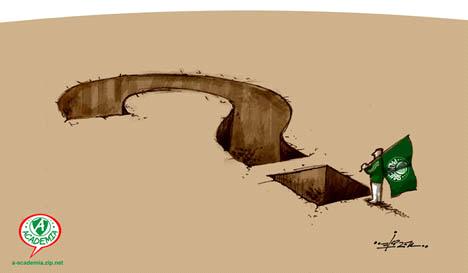 Palmeiras’ performance, both collectively and when talking individual players, has suffered a dramatic turn to the worse in the last few months. In my mind, it all boils down to two variables: “wanting” or “being able to”.

Sometimes, players won’t give 100 per cent on the pitch. There might be internal conflicts, or players might be trying to get rid of the coach, or they might indirectly be protesting against bad management, delayed pay checks or you name it. This is not the case at Palmeiras. Not today.

Has Scolari completely unlearnt how to coach? Have players like Márcio Araújo, Cicinho and Henrique – a few months ago hailed as successful and key players in a rather solid team – forgotten everything they’ve ever learnt about the game? Impossible.

In my opinion, we’re experiencing one of the most extraordinary collective meltdowns in recent history. Everyone involved want to perform better – they want it badly – but they’re unable to. It’s like a big, wet, heavy blanket suffocating everything that is Palmeiras. Luans’ crying after yesterday’s defeat against Coritiba is a clear indicator as any other: these men are broken in spirit. Yesterday, they ran and ran, but were again unable to convert. The underlying reasons for this have been discussed ad infinitum here and everywhere else – I will not repeat myself again.

The gap to the first relegation spot is a mere six points away (click on the tables to your right for a better view). If our point of departure is that Palmeiras remain at 41 points until the end of the championship – which is more likely than not – Bahia and Atlético Mineiro will surely surpass us. The question is if the coming five rounds will permit a reaction also from Cruzeiro, Atlético Paranaense and Ceará (let’s with all due respect consider América Mineiro and Avaí as relegated already). Although it’s not likely that all three of these suddenly start winning games (especially not Cruzeiro who is in as deep a well as Palmeiras), it cannot be discarded. In fact, it doesn’t take much to imagine the imaginable.

Against coming opponent Grêmio, Palmeiras stand without five players: Rivaldo and Chico (third yellow), João Vítor (red card), Valdivia (serving the Chilean national team) and Marcos (injured). In addition, Gabriel Silva might be travelling to Italy to sign for Udinese. The only good news is the return of Maurício Ramos. And the hopefully positive influence of César Sampaio in this his first week at Palmeiras.

Below, highlights from yesterday’s game. As usual, nothing you’ll enjoy. AVANTI PALESTRA.