On Friday, ahead of Saturday’s game against Avaí, coach Cuca told the squad Felipe Melo would not be in the starting eleven nor on the bench. On Saturday night, after a convincing 2-0 against the team from Florianópolis, Cuca laid it out to the press: Felipe Melo will not proceed at Palmeiras.

Melo is an ambitious and strong-headed individual, never comfortable with the bench. Cuca does not see Melo’s playing style as ideal while seeking to emulate the characteristics of the 2016 team: speed, quick transitions, advanced positions paired with aggressive marking of the opponent. This was discussed with the player and mutual consent was reached: better part ways. Simple as that.
. 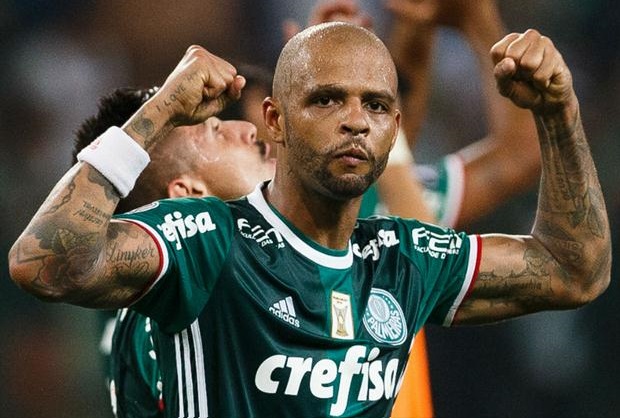 .
With his extremely outspoken and self-promoting personality, Felipe Melo has divided opinions among palmeirenses. Personally, I have no problem with him leaving. I see better options in Bruno Henrique and Thiago Santos, paired with Moisés’ emminent return. Palmeiras are paying the price for a rather turbulent first six months, Cuca’s absence and subsequent return the pivoting factor. At this point, Cuca needs full backing to catch up for time lost, within limits reshape the squad and find that playing style he so much envisions. Anything not part of the solution is part of the problem.

Melo has played only five games so far in the Brasileirão, he has not reached the limit that would prevent him from defending another first division team this season. There are however no indications at this point regarding his future: possibly, he will remain at Palmeiras for a few weeks, training in separate, while things are being solved. His contract with Palmeiras formally ends in December of 2019.

During his seven months at Palmeiras, Melo played 27 games and scored twice. Although his passage was brief, he certainly left his mark, always defending the club with blood and sweat.

Anything Palmeiras wishes Melo good luck in his future endeavours.

We learnt today from Palmeiras’ director of football Alexandre Mattos that removing Felipe Melo from the squad was far from solely based on technical/tactical concerns. A number of incidents involving Melo had occurred previously, but had been dealt with internally. After Wednesday’s elimination from the Brazil Cup, Melo’s disrespectful attitude in the locker room reached new heights. As the news of the occurrence reached Palmeiras’ directors, they decided to remove Melo, having previously consulted Cuca regarding the possible impacts on the field.

Melo was formally communicated on Friday morning. On Friday afternoon, the player apologised to Cuca, club president Galiotte and the squad.

Any possibility of reconciliation was effectively torpedoed yesterday night: in a leaked audio, recorded Sunday night, Melo launches a personal attack on Cuca, in addition to voicing his wish to play somewhere else.

Melo will train separated from the rest of the squad, awaiting interesting offers. Mattos stated there are none on the table at the moment.