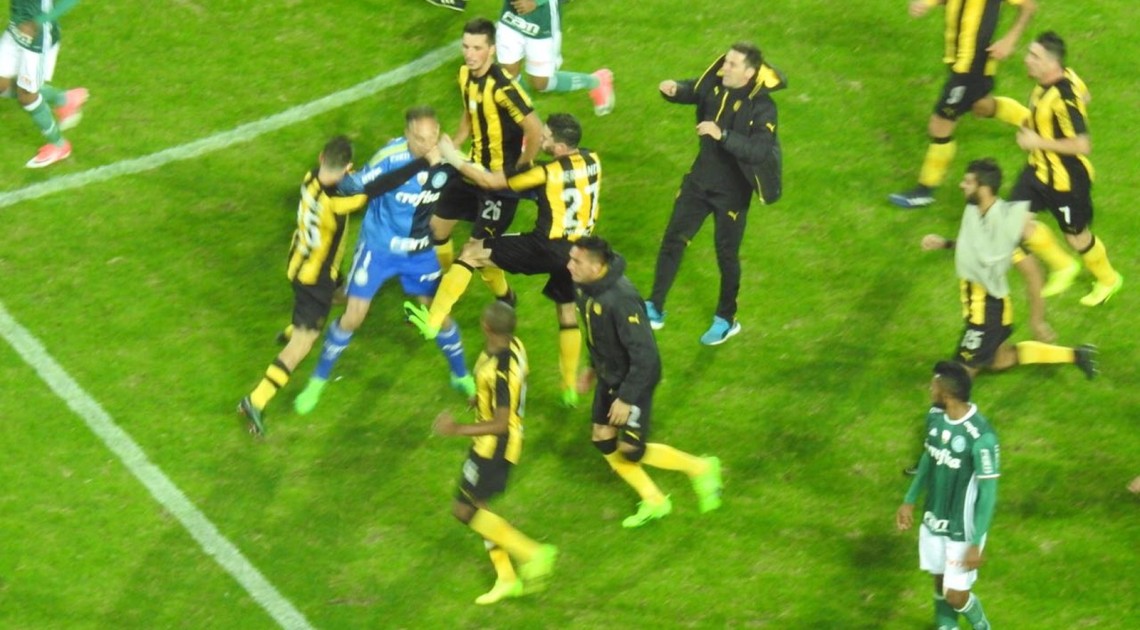 .
Conmebol’s Disciplinary Committee has made public its ruling on the scandalous events following the Peñarol vs Palmeiras Libertadores Cup game. As previously reported, Felipe Melo received a six-game ban, while three Peñarol players received five games each. In addition, Peñarol must play their last home game before an empty stadium: a slap with a silk glove, as the Uruguayans are already eliminated from the tournament. Palmeiras on the other hand was sentenced to three away games without supporters, meaning that only in the case of advancing to the finals, palmeirenses will be present.

Palmeiras promptly issued a formal statement, which you find below, in a free translation.

“In view of the disclosure of Conmebol’s ruling on the incidents related to the match against Peñarol, the Sociedade Esportiva Palmeiras hereby announce that:

1 – The feeling is one of total indignation and revolt for the lack of criteria in Conmebol´s application of penalties for the two clubs and their athletes.

2 – It is on the verge of mockery that Peñarol, the club responsible for the safety of the match and the one who did not fulfill its function, receives a penalty lower than that of Palmeiras. Palmeiras, both team and supporters, being the victim of an evident ambush, in addition to other crimes. It is worth remembering that, in spite of the tense atmosphere during the first leg against Peñarol, safety at the Allianz Parque was guaranteed by nearly 600 professionals, able to avoid any kind of incident. This contrasts to the tiny and unprepared group of 60 private security guards hired by the Uruguayan club for the second leg.

3 – The Conmebol Disciplinary Committee has short-sightedly preferred to base its evaluation on the consequences and not on the causes of events.

4 – Palmeiras reiterates what the club has sustained from the first moment, at the stadium in Montevideo: the club and its players were victims and not causers of the incidents after the game. We proved to Conmebol, through a vast selection of videos, photos and testimonies, what really happened in that game. By the outcome of the ruling, it seems technical criteria were not taken into account, which is completely inadmissible and inconsistent. It is unacceptable that a Palmeiras athlete be punished for defending himself against a clear attempt of aggression and that supporters – clearly cornered, attacked and the target of racist manifestations – are now prevented from following the team through the competition.

5 – Palmeiras’ Legal Department is preparing an appeal, contesting the penalties applied to player Felipe Melo and the club. The appeal will be brought before the Conmebol in the coming week.

6 – The Sociedade Esportiva Palmeiras will seek justice. The club does not accept any other position of Conmebol’s Disciplinary Committee but a revision of its decision and a ruling solely based on technical criteria.”

Needless to say, supporters are wholeheartedly behind the club on this one. Many hold the opinion Palmeiras must withdraw from the tournament should Conmebol maintain its ruling.

For Palmeiras’ upcoming last game in the group stage on Wednesday, at home against Atlético Tucumán, a silent protest against Conmebol is planned. During the National Hymn, supporters on the stands will raise their arms towards the sky in the same manner Felipe Melo did after the final whistle against Peñarol. In the same manner he does after almost every game. In the same manner now labelled “a provocative gesture” by the referees and Conmebol, a gesture they argue sparked the violence.

Anything Palmeiras strongly urge everyone to adhere to the protest on Wednesday. 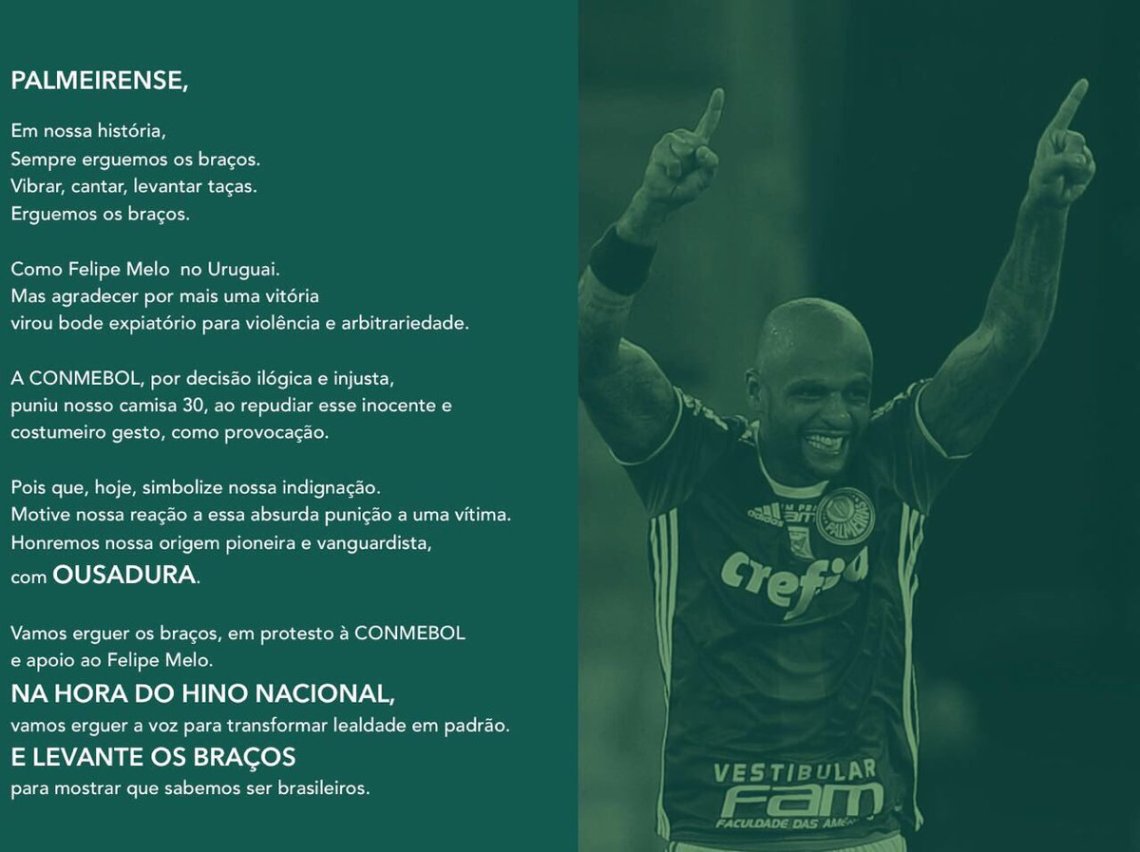