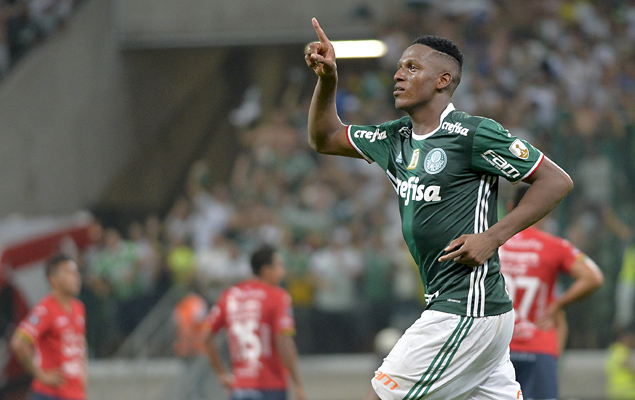 .
Must admit I expected an easier task. Jorge Wilstermann proved to be well trained, tactically obedient, a hard nut to crack. Both Tchê Tchê and Dudu suffered strong, individual marking throughout the game and Wilstermann’s line of five defenders recomposed quickly at every turnover, making triangulations at the flanks difficult.

Palmeiras were in control the whole game, not only enjoying much superior ball possession, but also using it objectively and offensively: numerous clear chances were created, especially in the first half, Borja again and uncharacteristically blowing his share. Close to no shots were fired by Palmeiras from outside the penalty area: a mistake, as this allowed the opponent to compact his defence even further. Even so, on several occasions a Palmeiras player, often Dudu, was inches from breaking free with the keeper, the linesmen having a very busy night. All in all, Palmeiras performed decently well, with plenty of intensity, just not getting that last detail right.

The referee allowed for more than he should but overall kept things (in my opinion) rather balanced. That being said: in true Libertadores style, the catimba was reigning, Jorge Wilstermann delaying the action whenever possible. One of theirs even teared his own shirt in order to render Yerry Mina a yellow card.

At the second half progressed, nervousness kicked in both in the packed stands and on the pitch. Palmeiras dipped a bit in production, but picked up speed in the last 15 minutes, pressuring hard. Guerra and Bastos gave way to Keno and Roger Guedes, the latter much involved in the action evolving toward the end, especially on the right flank, including the cross that Yerry Mina met to declare victory in the game’s dying minute. Relief!
.


.
With four points after two games, Palmeiras (at least temporarily) assume top position in group 5. Later today, Peñarol receive Atlético Tucumán; should the visitors win by two goals or more, they take Palmeiras down a notch.

Next Libertadores round takes place in little less than a month. Palmeiras now refocus on the São Paulo championship, where we have the four last round of the group phase before the quarterfinals. Santos await at the Vila Belmiro upcoming Sunday: expect another exciting match.