Saturday marked the return of Chapecoense. All revenues from the friendly against Palmeiras were destined to the Santa Catarina club and the victim’s families. The pre-game ceremony was very emotional, with the three surviving players and representatives from the families receiving the South America Cup trophy and medals. As Palmeiras’ defensive midfielder Felipe Melo put it: I arrived here prepared for a game of football, but after seeing two children crying, my emotional readiness was all gone. I cried myself, at several moments during the game.
. 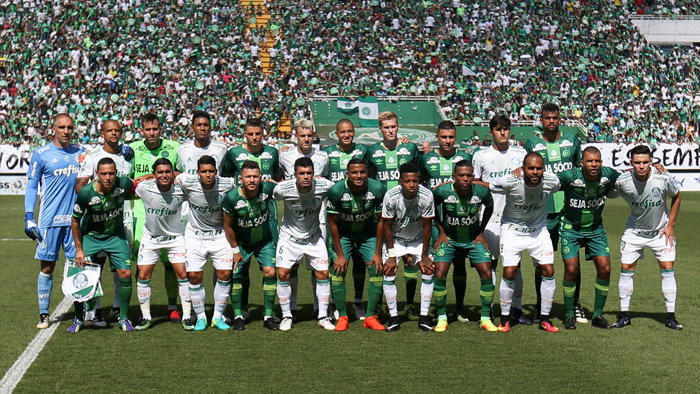 .
Palmeiras and Chapecoense have created quite the bond. On several occasions, Chape directors have stated that although many clubs promised many a thing right after the tragic plane crash, intentions rapidly vanished, Palmeiras being one of the few exceptions. In addition to the friendly game, three Palmeiras players are on loan to Chape, Palmeiras paying 80% of these player’s salaries throughout the year. Palmeiras have also put their legal department at Chape’s disposal, as well as offered to share know-how related to stadium management.

This being pre-season, and with all the added commotion due to the unique nature of the friendly, I limit game-related comments to a couple of observations: young gun Vitinho certainly made an impression on coach Baptista, with dribbles, passes and the beautiful goal that closed the scorecard at 2-0; word is the European market is already watching him closely. Also Raphael Veiga showed quality on the midfield, in addition to scoring Palmeiras’ first. Picking the 28 that will compose Palmeiras’ São Paulo Cup squad will be quite the challenge.

Upcoming Sunday, a friendly against Ponte Preta, at the Allianz Parque: probably the last one before the Paulistão kicks off on 3 February, the Verdão making their debut against Botafogo-SP on the 5th.