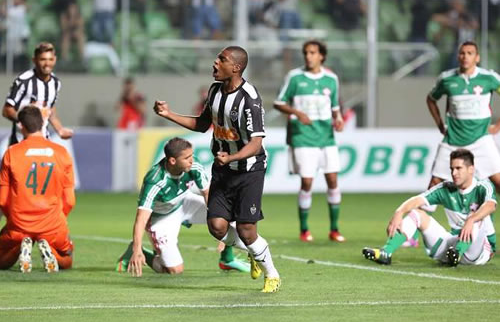 .
Atlético Mineiro breezed through to the quarter-finals of the Brazil Cup, once again exposing a Palmeiras squad in shambles. It took the mineiros less than 20 minutes to get the message across to Dorival – placed next to Paulo Nobre in a box at the Independência stadium – in case he had any doubts: your one and only mission is to save Palmeiras from relegation, that’s all there’s left in 2014.
.


.
Some have argued the team has been underperforming as of late in protest of Gareca. Others have anticipated Alberto Valentim’s return as interim coach, imagining he would repeat the success he enjoyed after replacing Kleina earlier this year. Both outlooks proved wrong: resent results is a direct reflection of the squad’s weakness. In fact, today’s squad is one of the worst that many of us have ever seen and even journalists, with access to all sorts of archive information, are hard pressed to come up with a weaker Palmeiras squad.

This coming Sunday, Palmeiras initiate a sequence of “favourable” games against direct contenders: Atlético Paranaense (away), Criciúma (home), Fluminense (away), Flamengo (home), Goiás (away), Vitória (home) and Figueirense (away). 3 or 4 victories, and we can start believing in the firing squad missing their target. Normally, a team with 46 point will escape relegation. Palmeiras thus need to bag 29 points in the remaining 20 rounds.

New players of rank will not arrive, this is the squad we’re stuck with. Dorival must get back to basics with these men, apply the Brazilian “arroz com feijão“, parting from the KISS principle and start rebuilding players self esteem. The now orphan Argentine players are of special concern: it’s crucial that they are embraced, encouraged, given opportunities.

It’s hard to underestimate the importance of keeper Prass and playmaker Valdivia: both recovering from injury and expected back within a week or two. If they perform like we know they can, and if they (read Valdivia) remain healthy, I seriously believe we’ll be “fine”.

“Fine”. Look at what they’ve done to us, done to Palmeiras. How can one even contemplate using “fine” under circumstances like these?