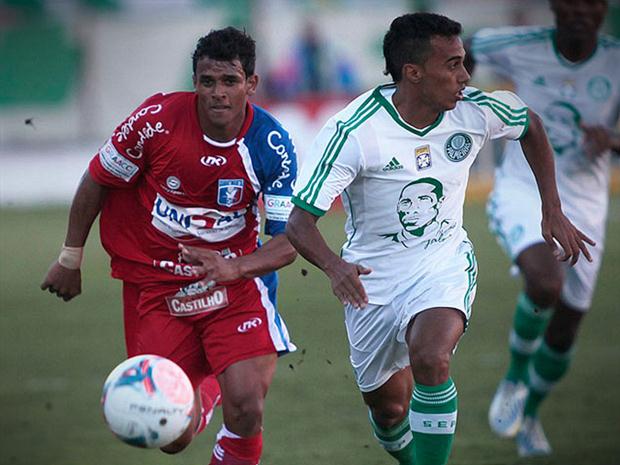 .
Friday’s game against Guaratinguetá sported Palmeiras in a classy, white jersey with Djalma Santos’ face stamped on it: a tribute to the legendary right-wing defender who left us last week. Unfortunately, the jersey was the highlight of the game. That, and Leonardo’s goal: a set piece from a corner featuring Vinícius and Valdivia.
.

.
The draw saw Palmeiras dropping to second place in the tables, leaving way for Chapecoense. The result was no disaster and can be easily explained: the state of the pitch was horrendous, seriously limiting Palmeiras’ technical advantage; the referee was weak, allowing the game to get violent and turning a blind eye at times, most crucially when Valdivia suffered a crystal clear penalty; and last but not least, Palmeiras’ players not 100% on their toes.

This is something one needs to get used to, however frustrating. Palmeiras will be the favourite going into any game in the second division, that meaning Palmeiras are also expected to win. Have conditions to win. “Should” win. But will not always, of course. When drawing or losing, supporters will indifferently feel annoyed and irritated in the knowledge that those three points were more than accessible.
.


.
Tomorrow night, Palmeiras welcome Icasa at the Pacaembu stadium, the adversary currently holding 9th position with 13 points, trailing nine points behind Palmeiras. Expectations are high for the possible debut of Sebastián Eguren – the defensive midfielder recently arrived from Libertad: his papers are now in order and there are at least no formal impediments to his inclusion on the list. Later today we’ll know.