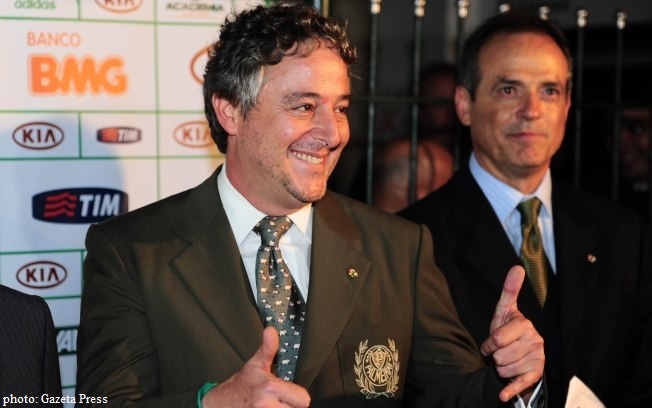 .
Defeating Décio Perin 153 votes to 106, Paulo Nobre is the new president of S.E. Palmeiras. The 44-year-old businessman and rally driver is the youngest to hold the chair in a little over eight decades.

The elections must be considered a grand slam for Nobre, as he also saw his four vice-president candidates elected: Maurício Precivalle Gagliotte, Genaro Marino, Antonio Jesse Ribeiro and Victor Fruges.

In addition to the presidency, the 264 conseglieri present yesterday also elected 15 new members for the Orientation and Fiscal Council (COF) and appointed a new president of the organ, substituting Alberto Strufaldi with Luiz Carlos Granieri.

Nobre conducted a press conference shortly after the elections and confirmed his desire for bold moves and radical changes to the administration of the club, however with sensibility and good judgement. He confirmed he wants to implement the position of “the manager”, here understood as in the European fashion, a person with broad responsibilities and responding only to the president. Nobre also underlined his desire to separate everything football from the social club, fundamentally important in order to bring professionalism into the game. This however depends on alterations to the statutes.

Paulo Nobre – himself with a solid background in the organised supporters of Palmeiras – stated that the supporter are the clubs most important asset and that he will do his outmost to attend their needs.

On Valdivia he said the playmaker is one of the best when inspired. When not, he is ordinary and turns into a problem. He would sit down with the player and have a frank conversation.

Finally, on Riquelme, Nobre said he would study the case together with his staff. He said he wouldn’t use his heart nor his passion, but conduct a thorough analysis of the costs involved and what the player could offer.

Throughout the interview, Nobre was very calm, clear and consistent. It’s unbelievably gratifying to once again have a President in the chair.

The tasks ahead are of course monumental, while Palmeiras’ financial situation is delicate and we need players urgently. But at least, there’s someone competent in the driver’s seat.

Best of luck in the following 22 months, Paulo Nobre and crew!