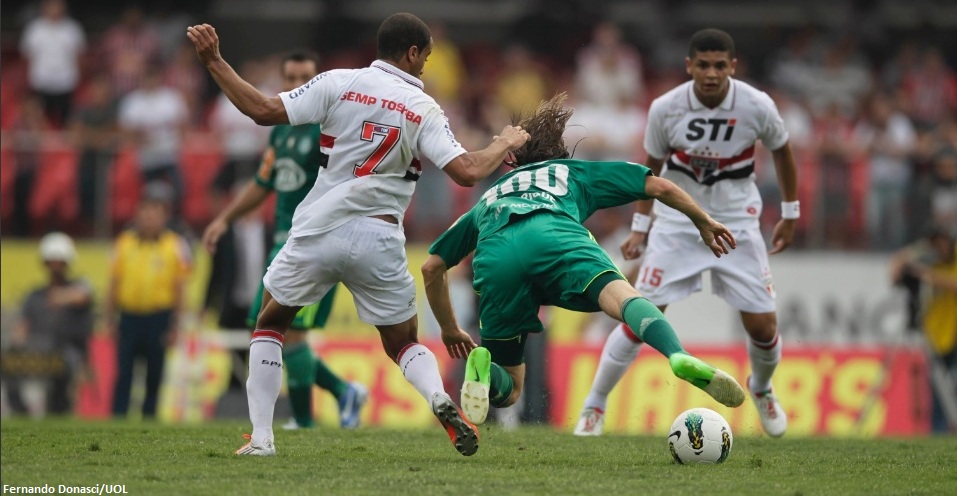 .
Complicated. Kleina didn’t repeat the lineup nor the tactical formation from previous games and was immediately punished. Daniel Carvalho and Valdivia together didn’t work at all: immediately São Paulo took possession of the midfield to never let go. Our wingbacks had a bad day also. Heck, the whole squad seemed disconnected, with Barcos alone at the top. Palmeiras were dominated, fair and square, only maintaining the status quo on the scorecard due to spectacular saves by Bruno.

Of course it couldn’t last long, not with players like Luis Fabiano and Lucas on the opposite side. We went to halftime with 2-0, goals by São Paulo’s #9 and Denílson.

Kleina tried to correct pieces and positioning in the second half, substituting Araújo and Carvalho for Luan and Tiago Real. The opening minutes looked promising, then Artur saw his second booking and all expectations flew out the window. Juninho walked off with a muscular problem, giving way to Correa. Then Valdivia hurt his knee and limped around before also throwing the towel. 3-0 followed, again Luis Fabiano. The rest consisted of trying to push the tricolor back while waiting for the final whistle from Paulo César de Oliveira – who today, in all fairness, executed his duties perfectly.

Of course a point or three would have been more than welcome, but few actually believed Palmeiras would win this afternoon: it’s been a decade (no kidding) since Palmeiras beat São Paulo at the Morumbi stadium. Now, the three upcoming games are all “do or die”, there is nothing else. Coritiba, Náutico, Bahia. Home, away, away. Realistic? Doesn’t matter, it has to be done. Three victories. Palmeiras are six points behind Coritiba with ten rounds to go.