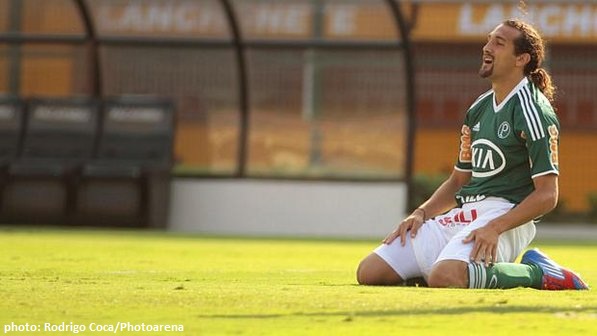 Undefeated since November 2011 (18 straight games) and now the only team that haven’t lost in this year’s edition of the São Paulo Championship, Palmeiras rest in third after yesterday’s goalless draw against a defensive-minded São Caetano. This being Palmeiras, didn’t take more for some elements, already used to Palmeiras scoring three goals in every match, start voicing their concerns…  Which should be solemnly ignored.

Palmeiras played better the whole first half and most of the second. São Caetano’s goalkeeper Luís had an outstanding afternoon and should, if anyone, be credited for the Azulão being able to keep Palmeiras at bay; a few spectacular saves (to be fare, we also saw some from our own Deola) combined with Barcos’ less tuned performance and a referee more than happy to turn a blind eye to São Caetano’s little tricks of the trade was all it took, even with Valdivia on the pitch for the full second half. In all in, El Mago‘s return was positive although Carvalho did create more during his initial 45 minutes. And Scolari continues to demonstrates no intention of putting his two “brains” on simultaneously: it’s a shame as we’re all curious to see what Valdivia and Carvalho could do together. Advancing Valdivia a little, leaving Maikon Leite on the bench, could perhaps prove worthwhile.
.


.
Palmeiras now have the full week to recover ahead of Sunday’s game against Botafogo/SP, currently first team out of the relegation zone with a meager nine points in twelve games. Three points on Sunday are mandatory in order to keep the pace up, put pressure on leader Corinthians and new runner-up Santos and silence those non-believers that are everywhere, not least in our own ranks. A victory would also be a terrific way to celebrate Luiz Felipe Scolari’s 368th game for Palmeiras: as of Sunday Scolari overtakes Wanderley Luxemburgo as the coach who most times has led Palmeiras after Oswaldo Brandão, the record holder with an incredible 580 games.