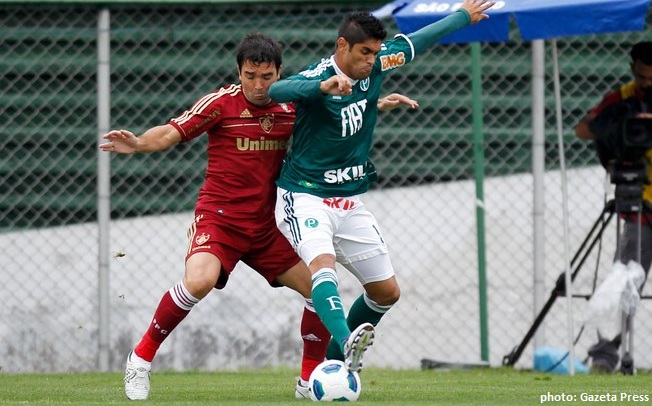 Five goals in two games: three on Thursday against Coritiba and this afternoon, two more. The Fluminense striker is on fire and Fred is indeed giving proof of why he’s been the choice of national coach Mano Menezes lately.

Palmeiras welcomed Fluminense without Marcus Assunção (the set piece specialist hurt his shoulder against Flamengo and will be out for the rest of the month) but with Valdivia. The Chilean put out a regular performance today, which is more than can be said for most. The spark is not there anymore, players show no spirit.

Fluminense could have killed the game in the first half but only Fred’s first goal marked the scorecard. Palmeiras came back stronger in the second half and Valdivia converted an inexistent penalty to level the score. We were heading toward another draw when Thiago Heleno, who failed miserably when Fluminense scored their first, pathetically allowed Martinuccio (yes, THAT Martinuccio) to cross a ball. Fred again. And Palmeiras’ first loss at the Canindé stadium this season. Watch the goals below.

Experienced assisting coach Murtosa led the team today, as Scolari left for Portugal to attend a son’s wedding. The trip has been planned for months. Some critical voices are heard, but I think it’s bull: Palmeiras were not facing the game of the year, not even the game of the month. In fact, it was just another ordinary game in what is bound to be a very ordinary year for Palmeiras. In my opinion, it should take much more than that to deprive a man of the opportunity to see his son getting married.