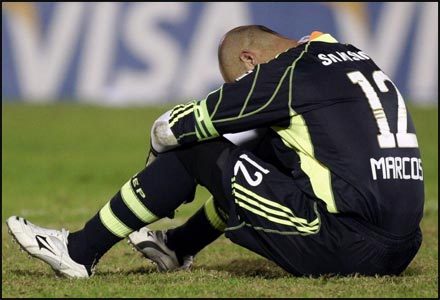 Marcos Roberto Silveira Reis – Marcos for short – has been with Palmeiras ever since he started his career in 1992.  With more than 500 games in the team jersey, no player of today is more intimately linked to the brand “Palmeiras”. If anyone has credibility to speak for the players, it is him.

In an interview for journalist Cosme Rímoli, published on the 21 December (link here), Marcos lets the cat out of the bag. Any true Palmeiras supporter will be horrified by the content of the interview, although those already with backstage access surely won’t be too surprised.

Below, the full interview, translated into English.

Marcos: Look Cosme; to me, everything is simple. I’ve never won anything with Palmeiras when there has been disunity. What’s lacking is people actually leaving their egos aside and work for the club. Right now, Palmeiras needs everybody: Valdivia, Felipão, Kléber, managers; everyone on the same side. Palmeiras is one of the biggest football clubs in the country; we have prestige, power, respect, titles. But everyone’s acting like it’s every man for himself. Everybody wants the same thing, but there’s a lack of awareness, humbleness to stretch out a hand, offer friendship, respect. It’s a shame.

Nobody wants to win more than I. And I know that without everyone pulling together, there’s no solution. With the team divided, and with the runner up of the presidential election acting against the President, there’s no way we can win.

That’s the problem. Palmeiras is strong, but fight against himself. There’s no need for (external) enemies.

M: It’s impossible not feeling sad with this whole complicated situation. I’ve had a long career, I’ve experienced many joys and sorrows. And I see the same mistakes happening over and over again, year after year, at Palmeiras. There’s so much division. It starts at the top and reflects on the team. Many people do not seek what’s best for the club. Instead, they cultivate their own vanity and do what they can to avoid other people’s success.

For this reason, Palmeiras stopped winning. The best Brazilian coaches have passed through here: Luxemburgo, Muricy and now Felipão. But it’s too difficult to work in this way. For any coach.

C: What do you think of Scolari’s work?

M: He’s doing everything, really everything he can in order to have Palmeiras back on a winning track, but he resembles a lonely man climbing a hill without any help. The quarrels between the managers affect his work. Everything ends up in his lap. And alone, he is unable to cope with it all. The players try to help, but there’s not enough harmony in the team. There are too many demands on us and we suffer because of the divisions “up there”.

C: What’s the impact of all this on your career?

M: Now that I’m near the end of my career and more experienced, I can see these things much clearer. I failed to win more titles with Palmeiras because of this lack of unity. I will leave this profession dissatisfied with the number of championships that we ended up throwing away, for sheer lack of unity.

This is the secret to what is happening to Palmeiras. Everybody knows it but pretends not to see: what’s missing is all pulling in one direction only. And those who are not in the driver’s seat, whoever they may be, should not sabotage the work of whoever is running things. We’ve lost many important players and titles because of these fights within the club.

There’s no way avoiding getting pissed off. I stay because I really like Palmeiras. I started and will end my career here. I get pissed off because Palmeiras is my home.

M: It isn’t, Cosme. People say so, but they’re wrong. Palmeiras is a competitive team with irreplaceable players. Danilo, Edinho, Valdivia and Kléber shouldn’t be allowed to leave the team. And how is Scolari supposed to assemble a team knowing that if he loses any one of these key players, he has no one to replace him with? There is indeed a shortage of good options on the bench. The team, when the squad is complete, is competitive and can put up a fight with anyone. Palmeiras’ supporters should not accept the idea that the team is weak. And speaking of the supporters: there’s not much to say about them – they support the team as much as possible.

C: What has been the worst thing happening to Palmeiras as of late?

M: Losing that game to Goiás (in the semi-finals of this year’s edition of the South America Cup, my clarification). Had we won, everything would be peaceful. We would be looking forward to a Libertadores. The power struggle within Palmeiras would be less due to the more important tasks ahead.

It seems that these things only happen to Palmeiras…

C: Let’s talk about you a little. Is it true that you have been physically recovered for about a month but let Deola remain as the first option between the goalposts?

M: It’s true. I’m fully recovered, but saw no point in going back to being first goalie just because I’m “Marcos”. Deola was in tremendous good form and he’s one of the best goalkeepers in Brazil. I had a chat with Felipão and decided to train hard in order to prepare myself for 2011. I did the right thing. Deola performed excellently.

M: Yes, Cosme. I cannot stand the pains anymore. I want to end my career playing at a high level. I won’t wait until I’m asked to leave. I’ve talked this through with my family and the people at Palmeiras. 2011 is my limit.

The hardest part is imagining myself far away from football. Far from the supporters. Suddenly ceasing to train for a game. Psychologically, it won’t be easy. I’ve felt it, I’m feeling it. But nobody is eternal, why should I be?

C: Will you continue at Palmeiras, become a trainer for goalkeepers, helping Pracidelli?

M: I’ve made a decision. I will not train other keepers. I cannot demand any more of my body. I will need to seriously think about what to do with my life.

C: Is it possible that you continue your life far away from Palmeiras?

M: My connection to Palmeiras’ supporters will be eternal. And also with the club that I support. But perhaps I will work as a player manager. No one can question my honesty, so who knows I could help other athletes with their careers. This is the path that most appeals to me now. I’m not at all considering coaching. I don’t have the patience for it.

C: What is the major feeling you get, looking at your long career within Palmeiras?

M: That I could have won many additional titles. I know that Palmeiras threw away several championships due to lack of unity. I just hope, from the bottom of my heart, that it doesn’t happen again in this last year of my career.

No more losing to ourselves! Enough!