After defeating Grêmio 1-0 last Saturday, Sunday was all about resting. Today Monday, only a light training session in the morning before heading off to Ecuador, where Barcelona de Guayaquil await on Wednesday. The Libertadores matchup for the group of 16 is illustrated below, with the second leg taking place in a month’s time.
. 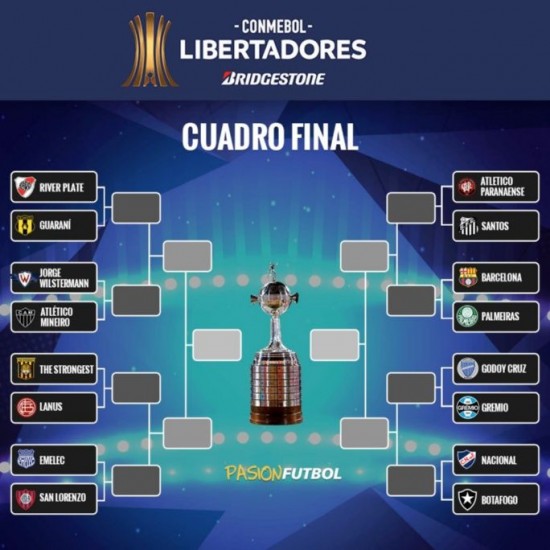 Ten days ago, CONMEBOL announced they were changing the rules regarding how many players a team could swap in their Libertadores squad – funny enough only hours after River Plate saw seven of their players fail a doping test. At the wave of a wand, the limit went from two to six players. Palmeiras today swapped four: Bruno Henrique, Juninho, Luan and Mayke replaced Rafael Marques, Vitor Hugo, Vitão (only still at Palmeiras) and Alecsandro.

The additional two swaps Palmeiras can (and certainly will) do up to 48 hours ahead of the second leg. One spot is dedicated to Moisés, who is in the final stages of recovery from his knee surgery. The last spot will probably go to a forward in Mattos’ crosshairs. Could be Diego Souza, currently at Sport. Before the weekend, we will know.

Palmeiras appealed and CONMEBAL revised the absurd rulings following the debacle in Montevideo: Felipe Melo’s ban has dropped from six to three games, and the three-game ban on Palmeiras supporters during away games has been reduced to one game (which will be the one against Barcelona on Wednesday).

Alberto Valentim is back at Palmeiras as assisting coach, after a brief spell at Red Bull. He left Palmeiras in December of last year, after it became clear he was not taking over after Cuca’s exit. Everyone celebrated his return, although Valentim himself recognises he is taking a step back in order to advance two steps in the future.

Someone on the verge of taking a major step is 19-year-old attacking midfielder Vitinho. Seems Barcelona are close to finalising a loan move with an option to buy. Cuca has publicly given his approval: “Good for the player and the club if he goes to Barcelona B. He’s training well but, unfortunately, he can’t get the necessary minutes with us. At the moment, he needs to play”, Palmeiras’ coach recently stated.

Saturday, the Allianz Parque hosted Ariana Grande. Already on Sunday, pictures showed the stadium in shape to receive a game, with the pitch apparently intact. For the first time, stadium management had used a technique to anchor the stage not on the ground but using the ceiling, resulting in considerably less strain on the pitch and much shorter disassembling time. Not a day too early.

The Allianz Parque, as first stadium in Brazil, has received the “Guiaderodas” seal of approval. The seal is given to venues that has proven fully accessible to wheelchair users and people with other physical disabilities. Unlike the old Palestra, the Allianz Parque was designed with full accessibility in mind from the start: parking lots, stands, restrooms, snack bars… There are 15 elevators and 26 escalators, and staff have been given specific training to meet the needs of disabled visitors.

As palmeirense wheelchair user Renan Barreiros commented: excellent news; will be even better once Palmeiras implement mechanisms that assure only disabled persons are able to reserve the specially designated seats at the stadium, as well as secure the same discounts that non-disabled, enrolled in Palmeiras’ supporter membership programme, enjoy for certain sectors. Seems Palmeiras are working on solutions; this is something worth keeping an eye on.