The additional wide-angle video footage that have surfaced in the last couple of days shows that Palmeiras were the victim of an outright assault at the Campeón del Siglo stadium, Montevideo. It all starts seconds before the final whistle, Willian going down after receiving a punch to the face, from behind, inside the penalty box. At the final whistle, Felipe Melo raises his arms towards the sky in his characteristic “thank-you” 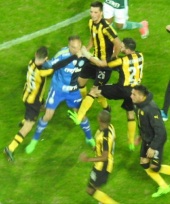 gesture, while several Peñarol players approach him, starts tugging (Melo still with his arms raised, defensively) then initiate a chase. Meanwhile, keeper Fernando Prass (pictured) tries to defend himself from a series of kicks and punches from three Peñarol players. As the debacle unfolds, now generalised, we see invading Peñarol supporters participating and, I kid you not, Uruguayan press (there is video footage of a photographer hitting Felipe Melo with what seems to be his tripod).

Awaiting trial, Conmebol has preventively suspended four players for three games: Palmeiras’ Felipe Melo and Peñarol players Nández, Mier and Lucas Hernandez. For starters, none of these was responsible for knocking out Willian.

Worse, the official reports from the referee and the Conmebol delegate state that the ruckus started when Felipe Melo, facing the Peñarol bench, made a gesture towards the sky, provoking a reaction from Peñarol players before mutual punches were thrown. The reports imply that “had it not been for Melo…”

The signals are extremely worrying. Seems Conmebol will spare little effort to, at least partially, blame Palmeiras for the events in Montevideo. Absurd? Yes, but not that surprising, considering the entity’s stance on previous occasions involving Brazilian clubs and any other Spanish-speaking neighbours.

Considering the above, it is even sadder to register the deafening silence from the Brazilian Football Confederation. Add to that the silence from other Brazilian clubs and the overall lack of support from Brazilian sports journalists.

Seldom has it come through more clearly: we are on our own.