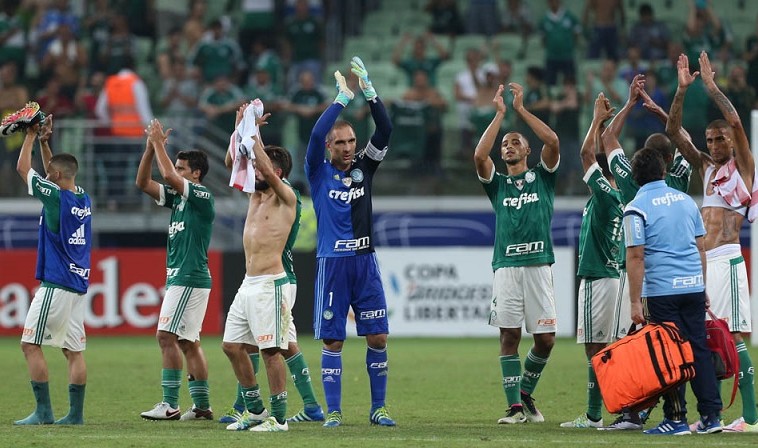 .
Apologies for the delay. I needed some time to process recent events. Cool down a bit, stay objective and constructive.

The good news are that Palmeiras keep on winning, undergoing a speedy transformation in the hands of coach Cuca. The collective is clicking and individually, a number of players have in a matter of weeks metamorphosed into their heyday versions. Egídio is perhaps the best example: one of the most criticised players in the squad has turned into one of the best as of late, excelling in passes, crosses, turnovers and possession. In similar fashion, both Alecsandro and Gabriel Jesus are enjoying their new positioning and taking full advantage. Jean is growing on his right flank, with merit displacing Lucas onto the bench. No one imagined Cuca so quickly grasping the situation, implementing solutions and reaping results.

This is all good and sufficient in the Paulistão, where Palmeiras only depended, and depend, on their own strength. Last Sunday’s 2-1 away win against Mogi Mirim – goals by Alecsandro and Lucas Barrios – kept Palmeiras at the top of the group with the prize being a spot in the quarter-finals, first leg this upcoming Monday against São Bernardo. In the other quarter-finals,  Corinthians beat Red Bull Brasil, Santos beat São Bento and São Paulo play Audax tomorrow Sunday.

In the Libertadores Cup, Palmeiras defeated  River Plate 4-0 in an excellent display of offensive aggressiveness and focus, with Egídio, Allione twice and Alecsandro getting on the scorecard. Home supporters recognized the effort and Cuca’s importance, giving the squad a standing ovation at the final whistle, even though Palmeiras at that very moment also said goodbye to the competition due to Rosario Central beating Nacional 0-2, finishing first in the group with Nacional second. This was Palmeiras’ 16th Libertadores Cup and the fourth time the team is eliminated before reaching the knockout phase (previously in 1973, 1974 and 1979).
.


.
Palmeiras eliminated, and this early, is of course a failure. We have discussed the sequence of events leading up to this, all the way from mid-2015: the swap as Oswaldo de Oliveira started to collect a few bad results and Marcelo Oliveira became available; Oliveira’s failure to convince but in the end bagging the Brazil Cup title and securing his stay at Palmeiras; the wobbly first months of 2016, keeping Palmeiras’ directors in a constant  keep-or-dismiss dilemma but with no strong replacement coach at hand; and finally, Oliveira’s dismissal and Cuca making himself available a tad too late to salvage the Libertadores campaign.

“Palmeiras hung on too long to Marcelo Oliveira”. Yes, perhaps. But Palmeiras tried to break a Brazilian paradigm, and a heavily criticised one, of firing the coach as soon as a handful of bad results occur. Marcelo Oliveira is Brazil’s most successful coach in the last 3-4 years. At Palmeiras he was given time, a more than decent amount of time, but he failed to improve. Perhaps Nobre and Mattos could have put more pressure on him, and earlier, but in the end, these are mere details: I sustain that Palmeiras, on the whole, did the right thing and acted coherently. Unfortunately, doing the right thing is no guarantee for success.
.

.
Palmeiras are two games from deciding the São Paulo Cup title. Then the Brazilian championship kicks off, and the Brazil Cup. Cuca needs to get plenty of things right if Palmeiras are to win any of these titles. But the squad is qualified enough, and Cuca is qualified enough. Judging by the last couple of weeks, Palmeiras have every possibility to be a main contender in 2016.