Yesterday afternoon, Palmeiras successfully concluded negotiations with Chinese club Henan Jianye, purchasing forward Rafael Marques’ federative rights for US$ 800K, signing a two-year contract. The player was very relieved, having loudly and clearly expressed his desire to remain at Palmeiras, even giving up bonuses he was entitled to in order to facilitate the closing of the deal. He immediately packed his trunk and left for Itu – where the rest of the squad is training – making a surprise entry, provoking laughter and applause from his comrades.
.

.
Rafael had a very good first semester in 2015, then gradually lost space – and seemingly a bit of motivation – in the second semester. Charismatic and clearly identified with the club, I am pleased with the renewed contract, even though I do not see Rafael as fundamentally important on the pitch. He however tends to grow in decisive moments and is part of the family: the fact that Palmeiras went to lengths to keep him emits good vibrations. 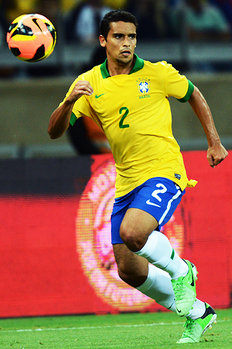 Yesterday, early evening, Palmeiras also signed defensive midfielder Jean from Fluminense. The 29-year-old was speculated at different clubs throughout December and January, Fluminense trying to play hardball although holding only 10% of the player’s economic rights. Truth is Jean wanted Palmeiras. And got it.

The midfielder, who is comfortable also on the right flank, became Brazilian champion with São Paulo FC in 2008 and with Fluminense in 2012. He did six caps for Brazil in 2012 (under Mano Menezes) and 2013 (Luiz Felipe Scolari). He has signed a four-year contract with Palmeiras and is, rightfully so, considered quite a catch.

The squad currently holds 37 players, but only 30 can be registered for the Libertadores Cup and no more than 28 in the Paulistão. Expect the likes of Mouche, Cristaldo, Allione, Nathan and a few more to find new clubs – either on loan or permanently – within a month or two.

And before I forget it: good work, Alexandre Mattos and Cícero Souza!
.