Yesterday, close to midnight, Palmeiras’ supporter membership programme Avanti reached the milestone of 100.000 members. This morning, club football manager Alexandre Mattos celebrated the feat, laying out the success behind the impressive growth of the programme before a large group of journalists. Mattos did however have some initial difficulties in exposing the importance of the programme in terms of revenues, self-esteem and visibility for Palmeiras: the journalists were more interested to hear about Valdivia and the ongoing negotiations regarding renovation of the Chilean midfielder’s contract. Mattos mainly sidestepped the question, saying that negotiations were underway, that there wasn’t much to report on, that it was a priority to have Valdivia back on the pitch as soon as possible and that Palmeiras – the institution – was working as a collective, where every piece is important but no piece is larger than the institution itself or irreplaceable. Several journalists insisted, up to the point that Palmeiras’ press office stepped in and said Mattos would answer no more questions about Valdivia at this point.
. 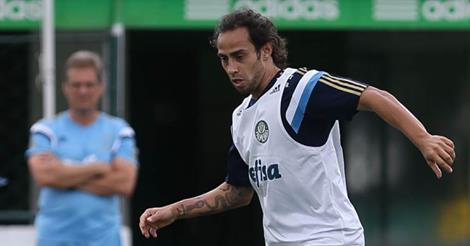 .
What has reached Anything Palmeiras is that negotiations between the club and Valdivia are tough: Mattos feels the player’s fixed salary must be considerably lower (obviously due to the athlete’s high injury rate), compensating that with productivity-related revenues. Mattos reportedly also seeks to secure Valdivia’s presence at Palmeiras, perhaps by including clauses that would limit the player’s coming and going to the Chilean national squad’s training camps and friendlies.

Spotlights used at this morning’s press conference were still cooling down when Valdivia fired away on twitter, claiming he needed to “tell his version”. He complained that scheduled meetings to discuss his renovation had been cancelled, that no one had told him a new contract would be productivity-related, and that the productivity model anyway needed to be revised because otherwise he feared Palmeiras would suffer like in the previous year. He continued stating he would never play for another club in Brazil and that he was eternally grateful for Palmeiras, but if it was time to leave, he would be leaving through the front door. And finalized: “Never have I positioned myself above Palmeiras, Mr. Mattos. With all your experience, it’s easier for you to call me up for a conversation”.

Valdivia is being Valdivia: self-centred, impulsive, and childish. As the other day, when he published a picture of a coffee cup with a Rio de Janeiro motif in the midst of speculations regarding a possible interest from Flamengo. That’s Valdivia. No news there. The question is: is there space for this kind of attitude in “Team Mattos”? I would say there is not. I would say Valdivia’s days at Palmeiras are numbered and that what we saw today, was a prelude to a farewell.

*UPDATE – while these lines were written, Valdivia posted a formal communication, saying he doesn’t want war, appologising to Mattos and reassuring everybody that he wants to extend his contract with Palmeiras. Mattos this afternoon met briefly with Valdivia’s father, giving continuity to negotiations.