While the team led by Luiz Felipe Scolari approaches the end of the year with real chances to bag the main titles of the season, Palmeiras’ youth divisions are exceeding last year’s already excellent results, reaching the final stages of all competitions in dispute.*

Palmeiras’ U20 yesterday, in Salvador, beat Vitória 4-1 to take a firm grip of the Brazilian championship trophy, the return game to be played at the Allianz Parque (free tickets if swapped for 1 kg of non-perishable food product) on 25 October. Wesley Carvalho’s side constitutes the base of the U20 Brazilian National Team and has the top two scorers in the competition: Papagaio (pictured), with 11 goals, and Yan, with 7. Vitão, Alan and Luan Cândido also shine brightly. In addition to doing well in the Brasileirão, The U20 team has also qualified for the quarterfinals of the São Paulo state championship, where it is the title defender. Red Bull is the opponent, on Sunday, do or die. The other teams still alive in the tournament are Corinthians, São Paulo, Guarani, Portuguesa, Desportivo Brasil and Ponte Preta. 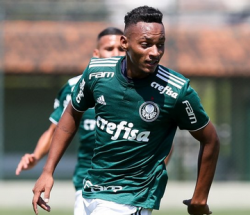 almeiras’ U17 in 2017 won the Club World Championship in Spain. Naturally, the side commanded by Artur Itiro forms the base of Brazil’s National Team. The stars of the team are Fabrício (pictured), Gabriel Veron and Gabriel Silva; Fabrício has 32 goals in 18 games and is close to breaking Gabriel Jesus’ record from 2014, when the kid netted 37 times. This year, in the Brazil Cup, Palmeiras are in the group of 16 and last Wednesday beat Internacional away 1-0, the return game taking place next week. In the Paulista, Palmeiras face Audax in the quarterfinals, the first match taking place tomorrow Saturday, 11am, at the José Liberatti stadium. The other remaining teams are Corinthians, São Paulo, Santos, Amparo, Mirassol and Novorizontino.

U15
Palmeiras’ U15 side is looking strong in the Paulistão, tomorrow morning playing Ponte Preta in the quarterfinals, in Aguas de Lindoia. Headed by coach Lucas de Andrade, Palmeiras U15 are the undefeated leader of the tournament, with 23 wins in 26 games, 76 goals scored and only 12 conceived. Players to look out for: Ruan Ribeiro and Robert Ribeiro (not related). The remaining teams are Corinthians, São Paulo, Santos, Audax, Desportivo Brasil and Novorizontino.

U13
Also Palmeiras’ U13 team has reached the Paulista quarterfinals, and as the best-ranked side. The first leg – away against Jabaquara – ended in a 3-0 victory for the Verdão. The second leg will be played this upcoming Sunday morning, at our training facilities in Guarulhos. Still alive and fighting for a spot in the semi-finals are Corinthians, São Paulo, Guarani, Inter de Limeira, Rio Preto and Noroeste.

U11
In the quarterfinals of the Paulistão, Palmeiras face Comercial on Sunday morning. The away game, in Ribeirão Preto, was a goalless draw. Still in the competition are Corinthians, São Paulo, Santos, Audax, Santo André and Marília.

At the Guarulhos training facilities, Palmeiras have built nothing short of a factory, spewing out top players conquering trophies left and right and integrating every level of the Brazilian National Teams. This prosperous cycle was initiated in 2013 by Erasmo Damiani – now coordinator of CBF’s youth divisions – and has since 2015 been under the coordination of João Paulo Sampaio.

Felipão has his eyes on these promising players and has been using the boys in several training sessions with the A-squad. Although these kids have never heard of Zero Wing, the future looks solid.

* This is a translated, shortened and slightly altered version of an article originally published, in Portuguese, on the Verdazzo portal.