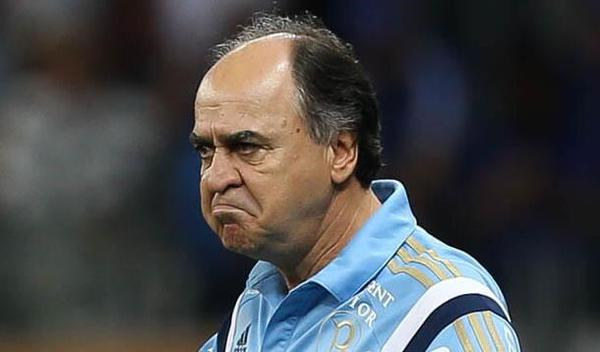 .
With the distance to the leader increasing to 15 points, Palmeiras might just as well throw in the towel. Finishing in the top four must however remain an absolute goal, as well as winning the Brazil Cup. Goals only achievable if Marcelo Oliveira is able to transform his dissatisfaction into concrete improvements on the pitch.

This 2015 has seen Palmeiras play well against good opponents and badly against weak opponents. It’s exactly when you think “this is the game to win”, that Palmeiras will let you down, repeatedly. Against Goiás was no different.

Yesterday, I felt an acute desire to see Leandro Pereira back in the squad. Leandro receives, turns, shoots – that’s it. Yesterday, our players seemed to think they were all Gabriel Jesus: tricking and dribbling and turning to find that perfect angle, opening, opportunity… Thing is the kid Jesus – yesterday again one of the few good players out there – knows how to, while most others don’t. I caught myself repeatedly screaming “take the shot, just take the damn shot”, always in vain.

Add to this the terrible phase of Egídio, Rafael Marques, Robinho… How can players sink so much in terms of productivity in less than a month’s time?

Let’s not forget Barrios’ goal, incorrectly ruled out for offside. Game-changing moment, that was.

But hey, although the end result might not have been fare, Palmeiras actually did little to deserve anything else. Slightly biased refereeing or not: this game was ours to win.
.


.
The Championship is gone. But not only for Palmeiras: it’s dying in the hearts and minds of Brazilians. Yesterday Corinthians beat Fluminense, the latter crying foul at the top of their lungs. So does Atlético Mineiro, claiming they were shamefully robbed against Atlético Paranaense. Ponte Preta idem, against Cruzeiro. Needless to say, palmeirenses are furious but equally resigned, feeling they have lived this script one time too many. Regardless of club preferences, all people talks about is the refereeing, how badly it influence results, and to what point this influence is deliberate. While CBF sticks its head in the sand. It’s killing football.

Meanwhile, Corinthians are flying high. Tite has his squad in a firm grip, with tactics implemented and the pitch well covered: a coverage which includes, the joke goes, two linesmen on the flanks and a centralized referee, articulating the action.

Where do we go from here? To the Allianz Parque, where on Sunday we battle the 2015 National Champions in a derby that will go down in history. Sunday, believe you me, the whole of Brazil is Palmeiras.